Questions about the Dictionary of women scholars 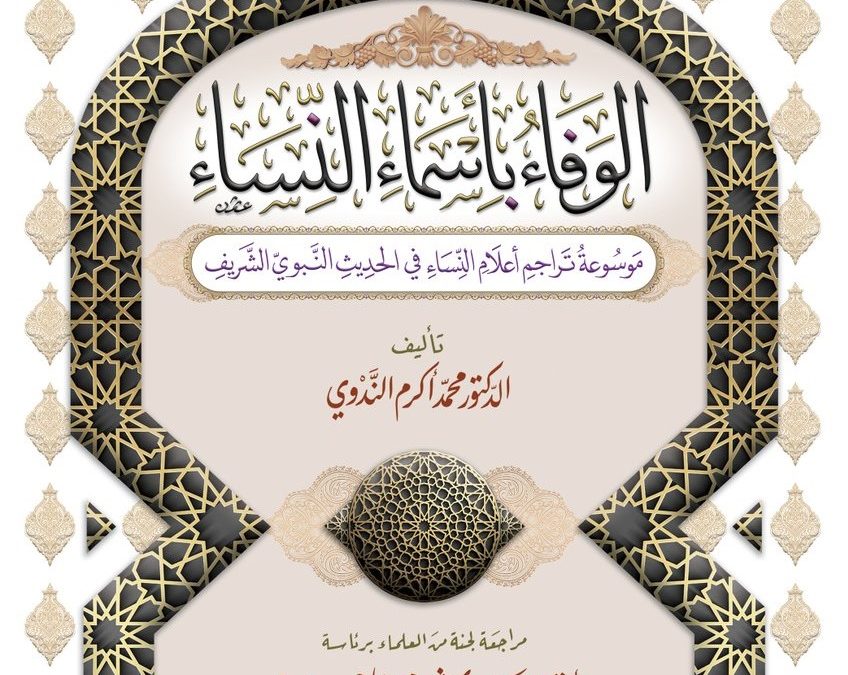 Two questions have often been put to me since the publication in Arabic of al-Wafa’ bi asma’ al nisa’ (Biographical dictionary of women narrators of hadith). This work was published in 43 volumes by Dar al-Minhaj from Jeddah in January 2021. The English translation of its muqaddima (preface) was first published in 2007 under the title al-Muhaddithat: the women scholars in Islam. This work has helped to promote hadith scholarship in Muslim societies, to highlight women’s role in it, and to draw attention to many questions concerning the status and respect due to women in Islam, especially the question of their authority and responsibility for the religion.

The two questions put to me since the publication of the full Dictionary are:

I am not going to explain here the difference between a narrator (rawi) and scholar of hadith (muhaddith). The explanation can be found in my booklet Mabadi fi usul al-hadith or in other similar works.

As to how many of the women included in the Dictionary are narrators, and how many are muhaddithat, I can only say that it is much too early to answer this question. The work is still at an early stage, and it would be quite improper to draw any conclusion on the basis of the research thus far presented to the public. For every entry I have provided all the information that I had access to and with full references to the sources of that information. As with any biographical dictionary, and similar reference works, it lists and presents the relevant information without analysis. I was unable even to get access to all of the known sources in Arabic, let alone sources in other languages used in Islamic scholarship. Only after more scholars have done more extensive research and spent time reflecting on the information collected will we be in a position confidently to distinguish narrators from scholars. If we look into the works of the early experts on narrators (for example, Bukhari’s) we find that many entries are very short. It took several centuries before that information could be filled out and then analysed. Perhaps the eighth century AH scholars like Mizzi (the author of Tahdhib al-kamal) and Dhahabi (the author of Siyar a`lam al-nubala’) were more successful in compiling relatively more comprehensive biographies. Similarly, for the women narrators and scholars we need much more research and much more time before we are in a position confidently to distinguish scholars from narrators. It would not be right to draw conclusions on the basis of incomplete information.

Narrators and scholars are listed together in the same work because it is in the nature of biographical dictionaries that they should be as inclusive and comprehensive as possible. It is the norm for this type of compilation. To take the obvious case of biographical dictionaries of men narrators –– these include everyone with a connection to the narration of hadith. The most important link to Sahih Bukhari in the later period in the whole Islamic world is through Abu al-`Abbas Ahmad ibn Abi Talib al-Hajjar (d. 730 AH). Experts in hadith, fiqh, and other disciplines, both men and women, all crowded around him in order to hear Sahih Bukhari and other works with him. He was an illiterate person, who had spent all his life building the Damascus fort and other buildings. Ibn Hajar `Asqalani (d. 852 AH) narrates Sahih Bukhari through him. Ibn Hajar’s contemporary, the great Syrian expert of hadith Ibn Nasir al-Din al-Dimashqi even wrote a book, namely al-Intisar li sama` al-Jajjar, in praise of Hajjar. This Hajjar was not a scholar but he is included in those biographical dictionaries and given full respect. Examples like this are plentiful among men narrators.

In Oxford, an orientalist once sneered that in their intellectual history Muslims could not even find five women scholars. For sure everyone now knows that that is not true. Study of the biographical information about women narrators and scholars can be expected to progress in the same way that it did for men. We must expect that many whom we might now regard as ‘mere’ narrators will, after more research and reflection, be regarded also as scholars.

What we can be certain about is that the number of women scholars (not narrators) is much greater than we imagine. I will quote here a historian from Central Asia who is writing about only his own region. He is `Abd al-Qadir al-Qurashi (d. 775 AH). He says: ‘It has come to our knowledge about mawara’ al-nahr and other regions that when a fatwa is issued from a house, it has the hand (i.e., signature and attestation) of the owner of the house, his daughter, his wife or his sister.’ (al-Jawahir al-mudiyyah fi tabaqat al-hanafiyyah, 4/1-2)

Alongside the need for more research, another major problem is that in more conservative circles, people were willing to provide information about their men scholars but not at all forthcoming about the learned women in their families. The great muhaddith al-Sam`ani says in the biography of Shaykhah Karimah bint Abi Mansur Muhammad ibn `Abd al-Malik ibn al-Hasan ibn `Abdawayh al-`Attar, the sister of Abu Muhammad al-`Attar al-Mustamli from among the people of Isfahan: ‘I wanted to hear hadith from her, and I asked her brother many times to facilitate my meeting with her, but he would make excuses, and I couldn’t hear the hadith from her. My companion and friend the hafiz Abu al-Qasim al-Dimashqi got for me from her the ijazah in 532 [AH].’ (al-Muntakhab min mu`jal-shuyukh, 3/1919)

Thus, there were learned women in Islamic intellectual history, but it was not easy to gather information about them. Only one thing about them is said unanimously by biographers in this field, namely that, whereas the biographical entries for men narrators include the names of hundreds of liars and fabricators, the entries for women –– and my al-Wafa bi asma’ al-nisa’ is an example –– contain not a single instance of a women accused or suspected of lying and fabricating. Imam Dhhahabi and other experts affirm that among the women there has not been a single fabricator, or anyone accused of lying.

As for the total number of women narrators and scholars: again, it is very difficult to know. I have collected many thousands. But that is the result of one person’s effort (amid other commitments) over a decade or so. If more effort is made there will certainly be many more names. After I had completed the book and submitted it for publication, I came across the names of many hundreds more learned women. I hope it may be possible to add these to the Dictionary in future editions.

It is also the case that I came across mention of a large number of women narrators and scholars, but I was unable to track down more information about them. This is a complaint also made by `Abd al-Qadir al-Qurashi:

By way of example of these mentions of untraced women narrators: Abu al-Hajjaj Mizzi, Imam Dhahabi and others mention about Muslim ibn Ibrahim Farahidi and Abu al-Walid Tayalisi, both teachers of Imam Bukhari, that they narrated hadith from seventy women. I was able to track down information about just a few of them. The vast majority of that ‘seventy’ remain untraced.

Imam Dhahabi (Siyar, 23/133) mentioned four hundred shaykhahs in connection with Imam Abu `Abdillah Muhammad ibn Mahmud ibn al-Najjar (d. 643 AH). I was unable to track down any one of those four hundred.

In sum, we should not be in haste to make definitive statements or claims on the basis of the information I have presented in the Dictionary. Rather, let more people spend more time on more extensive research until a fuller picture becomes clear. Let us support more research in every part of the Islamic world and in all other national and regional languages. The English translation of the muqaddima (mentioned at the beginning) has recently been translated into Urdu, Bosnian, French, with translations being undertaken also into Turkish, Spanish, Malay and other languages. I hope these will create more awareness, making more regional sources available to enlarge and improve the Dictionary. Meanwhile, I am heartened to note that my student Arzoo Ahmed (Oxford) has bravely started work on translating the 43 volumes of the Dictionary into English. This encourages me, of course, but I hope that it will encourage others also to help in promoting the recognition and appreciation due to women’s scholarship. We should be grateful to them for the service that they have done and do for the religion.