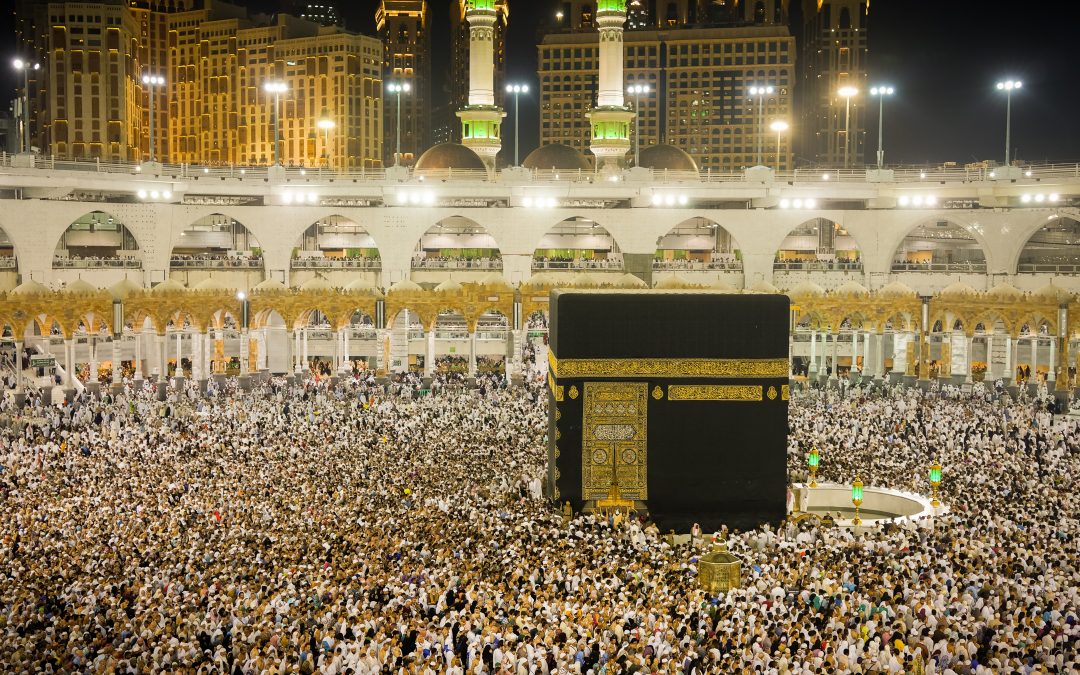 The Hajj represents for Muslims all the hopes and aspirations, all the testing and hardships, and all the consolations, of worship. It combines all the major pillars of worship: affirmation of trust in God and His Messenger; detachment, for God’s sake, from one’s wealth and possessions; disciplining of the body’s appetites, weakening their hold on the mind and heart; dedication of mind and heart to God in salah, which carries formal, scripted prayer into spontaneous, inward supplication.

In Islam, the prayer is not simply the words that one utters. Rather, the words are closely related to bodily positions and movements which express and support the meaning of the words and the whole intent of presenting oneself before God. In this way, body and mind are connected in the individual’s effort of prayer, and the individual and community are connected in collective worship. The memorisation of the Qur’an, done from early childhood, internalises it and inscribes it within the body, and the tongue recalls this during the prayer. Similarly, the necessary connection between heart, mind and body is reinforced by washing oneself in preparation for worship. Taken together, these elements of the prayer constitute a programme which connects and orients, and steadies and disciplines, body and mind together.

It is in a very similar way that the obligation of Hajj benefits those who can take part in it. Through the Hajj, the collective will of Muslims worldwide is connected to their history. It enables them to focus, memorialise, and symbolically relive that history in a specific geographical location. Doing so orients the community to what is most worthwhile in its ancient past, namely the dedication and sincerity of Ibrahim and his son Ismail. It enables them collectively to revive the values of Ibrahim and Ismail, and individually to inspect, refresh and revive, their own commitment to those values.

The Hajj unifies and brings together all the believers from different tribes and races and linguistic groups. Moreover, it does this unifying in a very particular way. It strips away whatever distinguishes human beings in their separate group identities, namely distinctive clothes, distinctive occupations and social statuses, disparate levels of wealth and ‘civilisation’. It strips all this away and brings people together on the basis of equality in one all-important respect, their equality before the judgement of God. All that they can bring to that judgement is the same, fragile human body (dignified in the same clothes as everyone else) and whatever is recorded within that body. In this way, the Hajj serves as a preparation and figuration of the gathering of the Last Day. Especially because it happens for many Muslims only once in a lifetime, the Hajj becomes a vivid experience of what it may be like to attend that last assembly when we have no opportunity to amend, add to or subtract from, our whole life’s effort.

The Hajj requires and represents not only the desire of the heart but also the physical effort in bodily exertions and outlays of wealth. Symbolically, this is a transporting of all the accumulated experiences (recorded in our body) of our life’s effort, and delivering them for judgement before God. The Hajj is experienced as a journey which has entailed a considerable expenditure of time, money, and of physical, mental and emotional energies. It should also be experienced as, possibly, the last journey we have been granted the means and opportunity to make.

Necessarily, this effort, because it is so costly, expresses a renunciation of and retreat from the world. It is worth remembering that, barely one hundred years ago, some Muslims would set out for Hajj on foot from places like Senegal expecting to be absent for as long as seven years and without any certainty of return. So they would, of course, say their farewells to the world and their loved ones, pay off their debts, and ask forgiveness for any wrongs they might have done. May God grant all Muslims a Hajj of this quality.

There is another aspect to the Hajj, namely its simplification and purification of certain ceremonies and rituals that were practised by certain peoples in that part of the world. Those who were later called star-worshippers used to study the cyclical movements of the stars and other heavenly bodies and situate their festivals to fit with propitious stages in those cycles. They would also try to imitate, through stylised movements on earth, some of the cycles and pathways of the heavenly bodies so as to be ‘in harmony’ with their gods. This was their way of trying to rise above the stress and disorder of life in this world, and to become part of a higher level of existence, which was ordered, mathematical, predictable and, they thought, permanent.

The rituals of Hajj by contrast only have the simple circumambulation of the Kabah. This expresses a deep reverence for, and commitment to, the same orientation in life as the builders of the Kabah, the Muslims’ noble ancestors, Ibrahim and Ismail. Our connection with them is not through a blood-line but through the line of true faith and good deeds. It is not restricted to the Arabs or to any other ethnic or linguistic group. Rather, the connection is made through the quality of trust in the One God. That is why, potentially, it is open to all of mankind. At the same time, the rites at the Kabah bring the whole train of prophets, first to last, into a common religious bond based on that quality of trust. Thus, the Hajj deepens the religion of Islam, gives it a long reach into the ancestral past, and qualifies it as the first and last, the beginning and completion, of God’s guidance. It is not easy to be worthy of it.