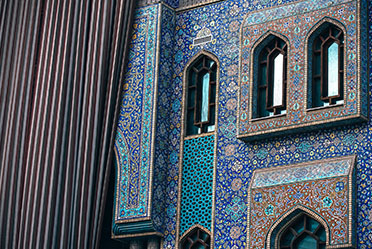 They asked: Inform us of our Lord, bringing Him closer to our perception, without being overly excessive nor deficient through our expressions.

I replied: What an excellent matter you have aimed and strived for, arising in my soul, with this question of yours, tremendous relaxation and delight.

They asked: Why are you so utterly jubilant with this question and delighted in such an unprecedented way? I replied: Doesn’t a person welcome and become overjoyed when you ask him to tell you about his parents, or about his noblest friends, or about those most beloved to him?

I replied: Doesn’t a person welcome and become overjoyed when you ask him to tell you about his parents, or about his noblest friends, or about those most beloved to him?

They said: Of course.

I said: Then talking about our Lord, blessed and exalted is He, is sweeter, more delightful and more refreshing than talking about one’s fathers and mothers, and those other than them from one’s relatives and friends. That’s a discussion, concerning which there is nothing more pleasing, more refreshing nor easier than it; and it is something I find my heart and tongue yielding to, and my mind and pen scrambling for.

They said: You are the first person to welcome us and receive our question with such a reception, as our request has become difficult upon whomever we placed it before, from our leaders and elders.

I said: What difficulty is there in this, and where the trouble therein?

They said: We are preoccupied with questions that arise upon us, in bewilderment and entanglement, and we don’t find a straightforward or firm way to answer them. We don’t know if His attributes mean what the words indicate, or something else. Is His speech created or not? Is that which is uncreated from His speech His personal speech? What is the difference between His personal and non-personal speech? Are the words about the Hand and Eyes, and the ascent and descent, on their apparent meanings, or are they metaphorical? Are we created for our actions and wind up inclining to them, or are we forced towards them, overpowered and unwilling?

I replied: How deep in ignorance of your Lord you are, and how far you have strayed from the right way! It is more befitting for you not to leave the bounds of what God has revealed, in ignorance, and it is more right for you not to be separated from them (those boundaries), in straying and neglect.

They said: Don’t be hard on us, but be with us like a merciful friend.

I asked: Did the Noble Qurʾān present such demands? Did the messengers of God and His prophets concern themselves with that? Did the Companions and Followers interpret this in such a way?

I asked: Were they not the most knowledgeable of people concerning God and the most fearful of Him?

They replied: Of course.

I said: Know that these are questions with no good in them, and that their inevitable end is your destruction as well as the destruction of those before you and after you. So why do you busy yourselves with them, falling into trial and being engrossed by them?

They answered: Because inquiring into them will make us realise the knowledge of our Lord.

I asked: How will you arrive at their realities with the same words that fabricators formulate with, and the same expressions that forgerers use? You have been deceived by camouflaged formulations and expressions pieced together, fancying them to be realities. Have you considered as to what is the easiest of all the topics of your knowledge and the closest to your understanding?

They replied: Our knowledge of the human being.

I asked: Have you attained the complete understanding of this reality?

They replied: Yes, for the human is an articulate animal.

I asked: Then have you comprehended the reality of what life is, or that of speech?

I said: Then how can you claim to have arrived at the reality of the human being, when you have difficulty comprehending the reality of his life and that of his speech? Then compare that with all of your understanding and knowledge, for those do not represent reality or truth.

They asked: So then what is truth?

I replied: Truth is an external matter, and words are merely references and allusions to that. As an example, the word apple isn’t the reality of the apple, but only refers to it. Knowing the reference does not necessarily indicate knowing its reality. If you have never tasted an apple, then these words despite their attachment to the apple will never acquaint you with it. Arriving at realities rests upon matters other than words and expressions. And how few are the things that we are able explain or reveal their truth of.

They asked: How do we arrive at it then?

I replied: None knows the full reality of things but their Creator—as He says, “How could He who created not know His own creation, when He alone is the Most Subtle in His Wisdom and the All-Aware?”—except that He has decreed for us that we be tested from what He willed from the things that we need and are dependent on. In fact, the reality of anything, however small, will always be greater than the sum knowledge of all humans combined, to the point that the lowly insect, the tiny ant, or a finger from the hand has thwarted the natural scientists from encompassing their full knowledge.

And I said: If that is the case with your knowledge of the lowest of what you observe and examine from creation, then how would it be with the Lord of the worlds, and He is One whom your sights cannot grasp, and exalted is He above your intellects and thoughts, and lofty is He above being the object of your whims and secrets. And the words from your created languages are nothing but references to the One for Whom there is no likeness unto Him nor His attributes. So stick to your limits and know your abilities, for it is disgraceful for a person to leave his guidance and exceed his bounds.

They asked: Then how do we know our Lord, blessed and exalted is He?

I replied: You know Him because you are already familiar with Him, for you are created with the nature to know Him just as you are created with the ability to know your mothers, and to experience joy and sadness, pleasure and pain, hunger and thirst, and desire for food and drink. The least level of awareness that is obligatory on human beings is to nurture and cultivate this basic, innate human knowledge.

They asked: How do we increase His awareness?

I said: First, rational arguments and theological discussions will never benefit you in the least, for Allah has placed for every knowledge and science certain paths and means; and only those who traverse these means can attain the knowledge, and those who turn from them will go astray and deviate. The means that lead to the knowledge of your Lord are basically four matters.

1. Observing His creation: When you observe the masterpieces of His creation and the wonders of His craft, your knowledge of His powers is strengthened, as is your knowledge of His knowledge and His mercy. So indulge your thought with looking at yourselves and contemplate the rest of creation. Discover these external designs that will lead you to be aware of the Designer who cannot be seen, and discover these signs that will testify that He is the originator of the earth and heavens; and uncover the abundant marvels that will indicate the wonders of His planning, and the benevolence of His command, and that the directing of this creation is by Him alone.

2. Reflecting on His words: Read them from the beginning to the end, with deliberation, thinking about His verses rationally, and keep returning to them without being cut off or heedless. There will be nothing from them that is hidden from you except that the veil will be lifted. So diligently stick to them in solemn devotion, following their apparent and hidden meanings in thorough inquiry, without distorting their meanings to the point of change, nor bringing to them alternate meanings. Its reminders and exhortations will come to you, making your skins tremble, your hearts soften and your tears flow.

3. Worshipping Him: Worship in all its forms, especially the prayer and the various types of devotional utterances (adhkār), are from the greatest of those things by which a person acquires a connection to His Lord and closeness to Him. God says: “Fall prostrate and draw near.” And He says: “So remember Me and I will remember you, and give thanks to Me and be not ungrateful.”

4. Supplicating Him: When you supplicate Him, you will behold with His response an amazing matter, which will increase your trust and confidence in Him. You will feel a close affinity to Him. With respect to what has been uttered in supplication, you will find One who hears and responds. You will find from every problem a solution, and from every evil protection. And it will stop you from finding another to fear alongside Him, and prevent you from asking Him and not receiving, and from placing your hopes in Him and failing.

I replied: So praise your Lord, and glorify Him, morning and evening, standing and sitting, and on your sides.

They asked: Can you mention to us some of the praises of our Lord that we may praise Him thereby?

I replied: Read those in the Book of God and the prayers of the prophets and messengers, especially those of our master and beloved, the head of the messengers and the seal of the prophets, Muḥammad, peace and blessings of God be upon him.

They said: You are our teacher, so please choose for us from those a portion.

I replied: I will do so, so keep an eye out for the subsequent treatise and wait for it, while praying for me for its success.