Supplications in the Quran 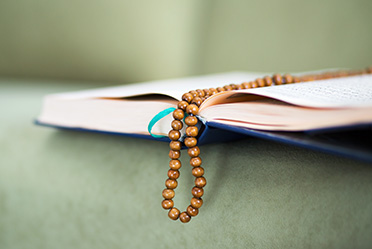 In the Quran supplication is a special form of human speaking addressed to God. We say human speaking because the Quran tells us that we humans do not understand the speech of other creatures who also address God. They address Him through their awareness that He gave them existence and that He provides the means of sustaining it; also, they express their gratitude to Him (hamd; shukr) and glorify Him (yusabbihu lahu maafi samawati wahmafi lard). Humans do this too, but something else besides. That something is a measure of the unique nature of human beings and the unique character of their speaking and, therefore, also of their supplicating God.

To understand supplication to God, we must understand what human speaking is, because it is a particular form of such speaking. Speaking is, secondarily, communication – conveying information or instruction, so that others know what they did not know before, or what you want them to do or feel as a result of having that information. In this respect, speaking can be efficient or inefficient, it can succeed well or poorly or not at all in communicating information or instruction. It follows that a learned, articulate person is better at this kind of speaking than someone who is not learned or not articulate. In real life, people tend to become articulate in particular domains of life, in which they have become good at communicating through practice and familiarity with special words and ways of speaking, while in other domains they may be quite inefficient. Supplication to other than God is an effort to communicate need, in hope of that need being fulfilled: petitions to the rich and powerful are obvious examples. However, primarily, speaking is not communication; that is not the major function of human use of language. Rather, the primary, major function of language is discovery and expression by human beings of what is inside them, a pouring out of what is already there in their hearts but not properly or fully realised. So, when the Quran (for example) tells us: Qul: huwa llahu ahad, we are being guided to realise fully what was already known to us as true. Human speaking, in its primary function, is an unfolding or unveiling, a putting out (uttering), a bringing into full, conscious awareness, what was folded up or veiled inside us, in darkness or some sort of half-light. In respect of this kind of speaking, no human is better than another; neither literacy, education and civilization, nor even assiduous training in piety and devotion, make one human heart richer in what it has to utter than any other. Indeed, one may go further and say that humans as such are no better in this regard than any other creature: it is only that we hear and understand our human speech but we do not hear and understand the speech of other creatures. What differentiates human beings in respect of their speaking is their ability or willingness to attend to their lived experience. It is possible, but not natural or easy, for human beings to float on the surface of their lives without attending to them, to go from moment to moment without reckoning, reflecting, remembering, planning. Some people make a conscious effort not to be aware that they have a life and that this life will end, and to avoid any concern that what they say and do has consequences for themselves and others. This is a life-style directly opposed to what is commended in all religions, all of which urge the seriousness and transience of life, and its being a preparation for another or further life.

In sum, human speaking is primarily an effort to be attentive, to reckon, reflect and plan, to build and gather meaning. It is an effort to signify, to be important, to value life as better than an undifferentiated stream of matters of fact. As I will try to explain, supplication to God is an intense form of bringing one’s self and one’s situation to one’s attention, a sort of fully waking up. Accordingly, it is a virtue to supplicate continually, though hardly possible. It is only easy, as the Quran teaches, at the ends of the day, or in the night’s stillness when the chains of the day’s business are less heavy.

Supplication to God cannot be an effort of communication. The Quran asks rhetorically, Would you seek to inform God of what He does not know? Since God already knows what you have need of asking him, communication cannot be the point of supplication. What then are the Prophets and Messengers, upon them be peace, up to, when they say, for example, ‘O God, I have need of whatever help you might give me?’ There is an answer in the perfect symmetry of the Fatiha: it teaches us to prepare the supplication for guidance and protection from straying off the Straight Path by first affirming that praise and thanks are due to God, that He is both essentially and actively merciful, that He has full dominion of the final outcome of all situations, to be revealed on the Day of judgement. Sometimes human need is overwhelming, and may be uttered first, almost involuntarily, like a cry of anguish. But in the example of those brought near to God, the balance is immediately restored: for example in the petition of Ayyub, `alayhi salam, ‘My affliction is great and You are the most merciful of the merciful’. Every petition of every Prophet, as reported in the Quran, is properly addressed to God in full acceptance of the oneness of His attributes, even if a particular appeal is to His mercy, or His knowledge, or His power, or His readiness to accept repentance and forgive all transgressions except the denial of His oneness. Every petition therefore expresses human dependence on God, it brings to attention the limitless extent of human needs and aspirations combined with the limitation of human powers, active or passive: neither the power to endure a situation nor the power to alter it, neither the power to desire or imagine a future nor the power to bring that future nearer to realisation are placed entirely in human hands. It is not even the case that we have control of the consequences of our deliberate, willed, carefully planned actions: all our actions (including our speaking) have unpredictable as well as predictable consequences, and we can only become aware of a few of them. The range of supplications in the Quran is wide: the need for full certainty of faith, the need for relief from the demands of life, especially the burden of prophethood in the face of its evident failure, the need for help in facing the trials and temptations of the life ahead or the consequences of the life past. I will be going through some examples to Ibrahim, `alayhi salam. But with this variety it is important to remember what, particularly and always, every supplication to God achieves for the supplicant: it makes the supplicant attentive to God and mindful of human need of Him.

Human need arises because God has created man with a capacity to send his thought, his inner being, to the furthest ends of time and space, even while, in his physical being, he is little, fragile and feeble. The reality that surrounds man is permeable to his thought, it informs and teaches him, it is rich with possibility and intelligibility. We can see a leaf and wonder how would it be if I combine this leaf with this other, what flavour might I cook up? We can get it wrong, we can guess wrong about how things are and how they work, but mostly we can correct our guesswork, and eventually get it right. Reality is given to us as informative and intelligible. We need it, and we are inscribed within it, while somehow somewhat able to put ourselves outside of it in our hearts and minds. Human mastery of reality is piecemeal and limited, so too is human attention. The supreme and first temptation is to be tricked into believing that we can have unlimited power. We can not. The first human pair suffered this temptation. So, in His mercy, God taught Adam the words, the first petition, the first, best use of speaking: we have wronged ourselves, and but that You would forgive us, we can have no hope. Every supplication to God says this, if in different situations and different words, out of the same need for reason to hope. Hope in respect of final outcomes comes unbreakably attached to attentiveness to God and remembrance of Him.

Unfortunately, our capacity to petition God in the right way, as God’s Messengers and Prophets have shown us, is itself subject to human liability to error and sin. So it is best to be aware of the wrong kinds of petition. The worst kind is that which seeks to impress God, to obligate God. Supplicating in this way is speaking in its secondary function of communication, intended to inform or instruct. In ordinary inter-human communication, people sometimes say, If I do X and Y, will you promise to do Z, or I promise to do X and Y, if you will do Z. Between these two persons, such speech is admissible, even normal: I have the power to do X and Y, and you have the power to do Z, so we can make a deal. In other words, the condition is a valid offer. Sadly, some people petition God on this same pattern and say things like: if You do Z, I will do X and Y, usually something like I will fast all year or I will never drink again or I will give more money to the poor, etc. In this case, the condition is not a valid condition because the person’s capacity to do X or Y is just as much in the gift of God as His will to do Z. It is most unwise to pray in this style. For this reason, God’s Messenger, Salla lahu `alayhi wa-sallam advised moderation in the forms of worship and other service done for God. It is notably foolish to try to impress God with one’s capacity for renunciation and self-denial. Rather, His Messenger advised us to do a little regularly, and build on that, while ensuring that what is intended for God is intended for Him and not for some other objective. In the famous Hadith of the poor, honest man who came asking what he could do by way of sadaqa, to purify himself and to please God, a number of options presented by the Prophet were refused by the man as ‘impossible’ for him. When the Prophet suggested that he do good to his neighbour (speak kindly, be helpful, etc.), the poor man said he could not do even that. Well then, the Prophet advised him, do not do any harm to your neighbour for the sake of God. And, at last, the man assented. The sadaqa is achieved by the orientation to God, by wariness of Him. Now, we can hardly ever achieve the quality and constancy of God-wariness of the Messengers and Prophets, but the effort of supplication can put us in that direction. That is what it is for, and for that purpose, nothing is more efficient.