The Standing on the Plain of Arafah 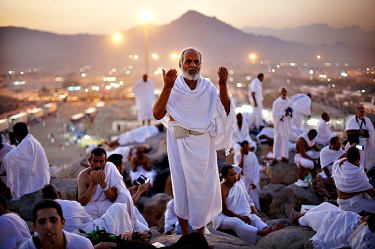 Ṣalāh essentially signifies entry into the presence of God. When an ordinary person comes before a powerful king into his majesty’s immediate presence, he becomes apprehensive and humbled. When that same person becomes removed and distant from his majesty’s presence, then that sense of humility becomes diminished or even absent. In ṭawāf (circumambulation around the Kaʿbah), God’s presence is ever present in the pilgrim’s mind. In the plain of ʿArafah, which stands at the very edge of the God’s sacred precincts, the pilgrim is obedient and present before God. His sense of entering into God’s presence is full of humility and compliance. Ṭawāf and the standing of ʿArafah cannot take place except in their designated places. Ṣalāh, on the other hand, is not restricted to God’s sacred precincts but is obligatory in every piece of God’s earth. Because of that, that same sense of awareness and presence before God is only realized after great struggle and effort. It only occurs when the worshiper forces himself to be restricted to specific standing, bowing, prostrating, reciting, glorifying God, and abstaining from food, drink and speech. These restrictions and conditions help to remind him of his standing in the presence of God and to develop the required sense of awareness and obedience.

Standing in ʿArafah encompasses many aspects of coming into the presence of God with a sense of penitence and submissiveness. The following are its most salient aspects:

1. It represents standing at the doors of God. Through these doors the pilgrim enters the sacred precincts. He stays standing, patiently waiting for the bulk of the day until permission is granted to him after sunset to enter the first portion of the sacred grounds. He does so remembering God profusely, and enters the ground of Muzdalifah. This is like standing at the entrance to the royal court of the king, as the person disciplines himself to become submissive, humble, devout and compliant towards the king.

2. The location is a deep reminder of the beloved. Which beloved could possibly be dearer than the Lord of the worlds, the Ever-Merciful and Ever-Compassionate One? Poets of old have frequently stood before the physical traces and reminders of their lovers to compile memorable verses, as Imraʾ al-Qays [verse translation: Paul Smith] did in his opening ode:
Friends, let us stop, at the remembrance of my beloved, be weeping . . .
She stayed between Dakhūl and Ḥawmal, where sands are curving.
At Tūḍiḥ and Miqrāt, her encampment still has not been erased . . .
For when south wind blows over it, north wind the sand is sweeping.

3. The place represents enjoying the traces of the beloved. God made ʿArafah one of His symbols. The worshipper moves from these symbols and rites to ascend onto God the Exalted. ʿAntarah b. Shaddād [verse translation: James Montgomery] states in his ode:
Did poetry die in its war with the poets?
Is this where ʿAblah walked? Think!
The ruins were deaf—refused to reply,
Then shouted out in a foreign tongue.
My came tried to withdraw—
I couldn’t move,
Ranting at the charred stones.
“Speak. Live. Prosper.
Here in Jiwā ʿAblah dwelled,
A timid gazelle, doe eyes,
Sweet smile, soft neck.”
I reigned in my camel, big as a fort—
I needed to weep, needed the shame.

Labīd b. Abī Rabīʿah [verse translation: Michael Sells] states:
I stopped to question them.
How is one to question
Deaf, immutable,
Inarticulate stones?

4. Every person inevitably spends prolonged time in absence from his beloved. Hence there is a need of rousing these feelings and emotions to bring out that dormant love. Standing in ʿArafah is a powerful means to stir up all aspects of love and longing for God in the pilgrim. Poets such as Zuhayr b. Abī Salmā [verse translation: Moustafa Elqabbany] have expressed this in this way:
Are these mute remnants of Umm Awfā’s nights
At Darrāj Pass and Mutathallam Heights?
And here’s her campsite ‘tween two fields much like
A wrist tattoo touched up by inky spikes.
Here wide-eyed antelope and addax scout
Successively as calves leap all about.
I stood before it after twenty years,
And with due strain, I knew her camp was here . . .
Its burnt-red rocks where once a cauldron sat;
Its ditch resembling some preserved old vat.
And when I recognized her camp I yelled:
“Good morning, living quarters, and be well!”

5. The pilgrim in ʿArafah increases in the fervor and intensity of his remembering God, crying and imploring his Lord. Imraʾ al-Qays [verse translation: Paul Smith] expressed this meaning of standing such:
Morning we parted I stood by acacia trees in our tribe’s garden,
Eyes blinded by many tears as pods of colocynith were bursting.
There, at that desolate place, I told my friends to halt their camels . . .
They said, “Do not die from sorrow . . . patiently bear your grieving.”
Ah no, the only cure for my grief is to allow for my tears to flow . . .
But what remains here of her, that some solace to me is giving?

Ṭarafah b. al-ʿAbd [verse translation: Paul Smith] states:
Khawla’s camp is now desolate, but on the Thahmad’s hills there
Are traces like pale blue figures, painted on back of a hand somewhere.

As I said this to myself, my friends halted their horses by my
Side and said, “Don’t let despair finish you off, act bravely here!”

6. The pilgrim is virtually addicted to the passion and fervor. He does not want to leave until his aims and requests are realized. What an excellent and rare way the poet Mutanabbī [verse translation: Abu Zayd] expressed the essence of this fervor when he said:
Ruined I am, much like the ruins,
were I not to pause, before their dust and ashes
Pausing like that desperate, greedy one
whose ring, in the dust has vanished.

This is how the essence of ṣalāh is expressed in the standing of ʿArafah, which is a powerful motive for engendering ambition and zeal for worship and repentance. That motive is less powerful in the case of ṣalāh in other places, and hence, the need for its restrictions and conditions which do not exist in the case of ṭawāf or the standing in ʿArafah. So strive to hold on to the institution of ṣalāh. Maintain the obligatory prayers in the mosques in congregation and increase in extra prayers in your homes. Strive to perform the pilgrimage (Ḥajj and ʿUmrah) to the house of God whose foundations were raised by Ibrāhīm and Ismāʿīl. Know that the pilgrimage nullifies your sins, increases your awareness of God, and helps you perfect your ṣalāh. Perfection of one’s actions is one of the highest aims of human beings, for God loves those who perfect their affairs.