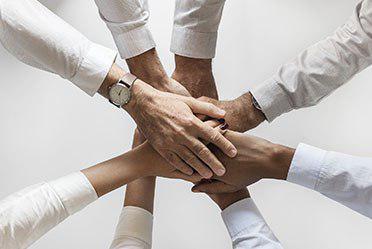 It was a depressing and distressing experience for me, at a recent visit to a mosque here in the north of the UK, to hear the call to prayer and then observe that some Muslims did not respond by joining in the lines for the prayer. Rather, they formed, later on, a separate jama`a for the same prayer in the same mosque. Apparently, the divisions among the Muslims attending this mosque were stronger and more important for them than the command, from God and His Messenger (saw), to hasten to the prayer and to make the lines for it. Among the many benefits that the institution of prayer brings to us, in this life and the next life, there is the good that comes from standing together for a common purpose. In doing this, we express the humility that is proper to our dignity as servants and worshippers of the One God. If we express that humility with a conscious understanding of doing it, we naturally expel the consciousness of what makes us different, unequal, incompatible, and we admit the consciousness of what makes us the same, equal, compatible.

God’s Messenger used to say to Bilal, ‘Bring us relief, rest’. For him and his Companions the call to prayer signalled an opportunity to rest from the business at hand, to get free of it, to settle their hearts, and to turn their attention to the most important of all business, the most pressing of all realities. Inna li-l-lahi wa-inna ilayhi raji`un. We say these words on occasions of calamity, most often when we hear news of someone’s death. We do so because the meaning of these words puts all matters into perspective and so calms us down. “Indeed it is to God we belong, and indeed it is to Him that we are returning.” There is no creature living to whom these words do not apply.

We all know these words, and we all understand their meaning. How then is it possible that belonging to some group can be more important than the belonging to God?  And if this group belonging is strong enough to refuse even  the call to prayer, which is a call to jama`a, to symbolise and express unity and solidarity – then, surely, this is a very strong, clear signal that there is something seriously wrong with such group- belonging. For a start, this belonging is functioning as a distraction, a dissuasion, from the occasions and purposes of congregational prayer.

God and His Messenger (saw), have commanded unity and solidarity. We should face attacks on the religion as a solid wall of defenders… We should desire for our brothers and neighbours what we desire for ourselves…. We should care about their need and distress as one part of the body cares about suffering in another part… All these commands and counsels are well-known to us, but we seem unable to act upon them. The consequence is that, far from being a solid wall of defence for the religion, Muslim groups are at war with each other and look for allies and supporters from among the enemies of Islam, in preference to seeking unity among themselves.

Once matters have deteriorated as far as they have, it is difficult to find the will to change, and to identify the means to achieve change. All that is possible is to take small steps, and then, provided we continue to take these small steps in the direction of improving solidarity, eventually there will re-emerge, in-sha’a Allah, a theory and practice of unity.

We can make a start by distinguishing matters of general and public concern, from matters that concern the internal affairs of individuals and the groups they identify with. Even the cleverest and wisest people, when they go to an airport or a railway station, know that there is a system in place, a way of doing things, and so they take instruction from people in charge there, whatever the condition of those people. Normal good manners, and the practicality of getting things done that everybody wants done, require consent and observance of the way things are arranged. So then, if the person appointed to call the prayer at a mosque calls to prayer, it is the normal thing to answer that call, promptly and with good grace – in that way, the task in which all are engaged can get started. So also, when the person appointed to lead the prayer leads the prayer, all those present must follow him, and they must do so in his mistake if he makes a mistake. Again, in that way, the task in which all are engaged gets done. Now, there is a known procedure, when the imam has made a mistake, of how to inform him, after the prayer is concluded. If the mistake is of a kind that requires it, the same imam will then do the prayer again, and again all will follow him. The reason for this is that we obey the imam because that is, on the occasion in question, the means given to us to obey God. In truth we obey God’s Messenger because God explicitly commanded it, and we obey those in authority for the same reason. There is always good, always comfort and ease of heart, in obeying God with good grace.

In almost every case, different groups form on the basis of exaggerated and unbalanced understanding of certain ideas, or on the basis of exaggerated and unbalanced ideas about what other groups’ ideas are.  Whatever these ideas may be, there are solid, everyday conditions of life that are not in the slightest degree affected by them. Those ideas make no difference to someone’s pain if they have suffered a loss or personal illness, or to their joy if someone close to them has known some happiness.  In other words, it is possible, across the divisions between groups, and it is especially commendable across those divisions, to meet with people and exchange joys and sorrows with them, to visit them, to dine with them, to shop with them, to relax with them. In taking these small steps, we are again obedient to the teaching of God and His Messenger (saw). Our God is one God, the God of the believers and unbelievers, the God of all that is, all in need of His mercy, and all in fear of His final judgement. The Qur’an is very explicit that when that judgement comes, even parents and children will flee from each other, having other pressing business. Our belonging to ties of family or clan or tribe or sect will not then interest us.

Every hurdle that we face in this life demands from us some appropriate adjustment of position and movement so that we can get past or get over that hurdle. Such adjustments always require some sacrifice, some shifting of priority — of bringing something forward and taking something back. So it is with the ideas of others that we do not like. The sacrifice needed from us is to suspend attention on and distaste for others’ opinions. This means being silent about what we wish to praise as ours, and what we wish to blame because it is different from what is ours.  It is often easier to sacrifice health and wealth than to sacrifice one’s opinion – but what is required of us is not that; rather, what is required of us is to sacrifice the need to declaim our opinions in the face of those who hold different opinions. God says He will make clear hereafter the differences between different beliefs and the groups formed around them; and He says that He will remove the rancour from the hearts of those who make their religion pure and sincere for Him. Moving towards that, step by step, is surely what will ease our path back to solidarity and unity, and to the dignity of being Muslims, those who have surrendered their will to God’s will – those who ask Him to help them do His will, not those who ask Him to do their will.