The Meaning of Du’a 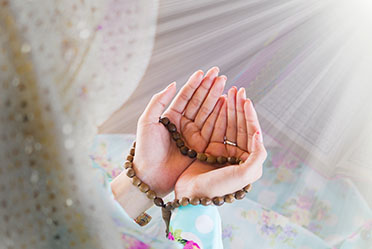 We have seen the disbelievers and polytheists mock dua. Doubt enters the hearts of those weak in faith and many Muslims do not resort to dua except out of habit and formality. There are very few who know the true meaning of dua and call upon Allah with the dua of a true believer; relying on Him, resorting to Him. What then is the meaning of dua?

The answer is that Allah Most High created people and did not make them self-sufficient. Rather he made them completely dependent on Him. He did not provide for them their every demand but provided means to fulfil them. He only made them dependent on Him out of love and mercy for them. For indeed, had He not made them dependent they would have become unruly and arrogant and would have had no need for their Lord. There is no greater harm for creation than to think they have no need for their Lord.

His command to not worship anything except Him and not to seek help except from Him is out of love and mercy for them. Therefore every time they overlook that, their needs come as a reminder to them and so they become alert and humble themselves to Him, repenting to Him as worshippers, seeking help from Him. He then responds to them and places the fulfillment of their worldy needs in various means.  He has made them as indications for their requests. It is for the truthful believer to know these means and to pursue them as is the command of Allah Most High. The means differ from person to person and from one state to another.

For example, Musa, upon him be peace, arrived in Midian and had no home to accomodate him. Nor did he have any relative or friend to host him so he turned to his Lord and said: “My Lord, I am in dire need of whatever good thing You may send me”. Allah responded to him and there came to him one of the two women. She said: “my father calls you to reward you for watering the cattle for us. And so Musa, upon him be peace, pursued the means and acquired all that he was in need of; a home, a wife, a trade. Allah granted him every goodness in the form of means.

And every slave is like that, if he makes dua to Allah, He responds. He is the one who says: “I respond to those who call Me”. From the etiquette of this dua is to humble oneself to the Lord most High, resorting to Him and obeying his command in eating and drinking, so when the slave makes dua to His Lord, He responds. It is necessary that the slave looks to the means that help him fulfil  his requests and he pursues them, reliant upon Allah most High. The means may be plenty or they may be few. All the barriers may even be lifted and the means removed if the slave is incapable of pursuing the means.

It is your duty, O believing slave, to not let an opportunity pass to resort to your Lord. He does not bring to you any need except to draw you close to Him by it. There is no doubt that dua is the essence of worship. The slave finds in it a sweetness that can’t be described.