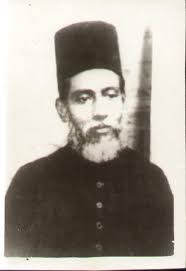 This world is an astounding place. And perhaps the most startling occurrence is when what one fears most transpires – the unimaginable.

We submitted this treatise (Imʿān fi Aqsām al-Qurʾān) for print whilst the author was still alive and well.  Not a month had passed before we were shocked to hear of his tragic death and were pained by his passing. He (may God’s mercy be on him) was one of God’s marvels, as was reflected by his sharpness of mind, great virtue, abundant knowledge, gentle character, sound judgement, his indifference to the frivolities of this world, and his desire to seek the pleasure of God.

He was born in 1280AH/1862AD in the village of Furīhā, in the Azamgarh district, in the state of the (pre-partitioned) United Provinces in India. He was the cousin of the great scholar of the East and historian of Islam, Shaykh Shibli al-Nuʿmāni, may God envelop him in His mercy.

After childhood, he threw himself into the pursuit of knowledge. He memorised the Qurʾān and studied Persian, as was the custom of noble families (ashrāf) in India, excelling therein. He composed a poem in Persian, difficult in radīf, where he attempted to compete in eloquence with the well-known Persian poet Khāqāni al-Sherwānī. His work greatly impressed the poets of his time.

Thereafter he studied Arabic in the company of his cousin Shaykh Shibli al-Nuʿmāni, who was six years his senior. He absorbed all that he could of the Arabic disciplines from him: syntax, grammar, lexicography, literature, logic and philosophy. He then travelled to Lucknow (United Provinces of Oudh), where he sat at the feet of the ḥadīth scholar and jurist, Imām Shaykh Abu’l-Ḥasanāt ʿAbdu’l-Ḥayy al-Lucknowi, the author of many celebrated commentaries.

Next, he made his way to Lahore and studied Arabic literature under the tutelage of the imām of Arabic, renowned poet and writer of that era, Shaykh Fayd al-Ḥasan al-Sahāranpūri, who composed a commentary on Dīwān al-Ḥamāsah and was a professor of Arabic at the Faculty of Oriental Studies in Lahore. Farāhi excelled in the study of Arabic literature and surpassed his peers in poetry and style. He studied all the pre-Islamic poetical collections, and mastered the skill of deciphering difficult passages. He would compose poems in the style of the great pre-Islamic poets and would write treatises with the precision of the most eloquent Arabs.

Farāhi started learning English when he was twenty years old. He was admitted into Aligarh University and thereafter obtained a BA degree from the University of Allahabad. He studied modern philosophy in Aligarh under the instruction of Dr Thomas Arnold, who was also the teacher of the famous poet and philosopher Muhammad Iqbal. Accordingly, he became well-versed in both sciences; ‘as complex as the two seas meet, yet there is a barrier between them they do not cross’. He was a scholar of Arabic and religious sciences, and well-versed in English and modern sciences. He combined the best qualities of a virtuous ʿālim and cultured academic.

It was in this time that he turned his attention towards pondering over the meaning of the Qurʾān, teaching and approaching it from multiple perspectives. He gathered information from all over, spending the better part of his life on this project. At the time of his death, he was attempting to complete a task that evaded the scholars of the past, to research what they were not able to explore, to gather together what scattered knowledge they left behind and to accomplish what they had set out to achieve. The Qurʾān was his main subject of discourse, its complexities had a soft spot in his heart, and his pen would dance across page after page to solve its nuanced dilemmas. He believed that the Qurʾān is a cohesive whole, and its verses a coordinated web. That every word and chapter in the Qurʾān is deliberately placed in line with its perfect wisdom, eloquence, and care for its content.

One of its aims was to improve how Arabic was traditionally taught by condensing cumbersome and redundant lessons into a more concise and streamlined form, taking out the obsolete sciences, and researching the sciences of the Qurʾān, examining its meaning, coherence and laws.

He was also involved in founding Dārul Muṣannifīn, which was established in memory of his cousin Shaykh Shibli al-Nuʿmāni. He used his free time to write and study the Qurʾān and its meanings, and to teach his students his findings. He facilitated the promulgation of Qurʾānic education, focusing on aspects that had been neglected by his predecessors.

He was, may God have mercy on his soul, devoted to this noble mission, until he departed from this world on the 19th of Jumāda al-Thāni in the year 1349AH (the 10th of November 1930AD).  He died a stranger to his surroundings in Mathura, a city known as a religious centre for Hindus in India. He had gone there to consult with an experienced doctor from his city who was working in Mathura. He was unable to find a cure for the illness which had exhausted him. The operation that the doctor carried out was not successful. Ḥamīd al-Dīn al-Farāhi stayed faithfully patient and grateful; he continued to recite the Qur’an, thanking the Beneficent until his fateful moment arrived; as the Quran says: ‘Everyone upon the earth will perish, and there will remain the Face of your Lord, Owner of Majesty and Honour’ (55:27). He is perhaps summed up best in these words: he lived graciously and died a martyr.

He left behind treasures – his insightful reflections that will never disappear.

Most of his work was in Arabic; the following is a list of the books that have been published:

(1) Lessons in Grammar (in two parts in Urdu)

(2) A Collection of Persian Poetry

(3) The Khurdanāma, a book in Persian on the wisdom of Prophet Solomon

(4) An article on intercession and expiation in English, in response to some Christian scholars.

(5) Al-Raʾy al-Ṣaḥīḥ fī Man Huwa al-Dhabīḥ (The Correct Opinion on Who Was Sacrificed),

(6) The exegesis of some chapters of the Qurʾān, which is part of the his Tafsīr Niẓām al-Furqān

From his unpublished works:

8) Exegesis of the remaining chapters of the Qurʾān, which, to the loss of the Muslim Ummah, was left incomplete.

9) Collection on Rhetoric, which includes the guiding principles for people to understand the inimitability of the Qurʾān, and a criticism of the principles of Aristotelian logic that led astray later authors of rhetoric (including Shaykh ʿAbdul Qāhir al-Jurjāni).

Be that as it may, some of his poems are to do with wisdom and good preaching. Farāhi cautioned people against negligence, warned them of the transient nature of time, and called them to the light of faith and wisdom. The Quran says: ‘There truly is a reminder in this for whoever has a heart, whoever listens attentively.’ (50:37)

The Return to Reason

Set out with the intellect wherever it goes;

Turn with the Truth wherever it flows

Do not be frightened by a blackened night—

Surely after darkness there is plentiful light

The night, the day, the sun, and the fire

All serve as a pertinent reminder

They kneel, praise, and call us to bow

in the early hours of dawn

A Warning about the World

How wretched the world is and those happy with its riches;

pitiful are those who strive in pursuit of its comforts

Its profits bring only loss;

its abundance only yields great miserliness

Thus, having the world and not having it are the same to me;

as is its union and separation.