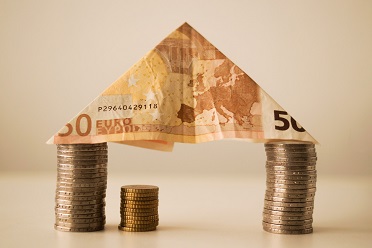 Is taking a mortgage to buy a house permissible if the money borrowed must be paid back with interest?

That which is impermissible (haram) can become permissible (halal) in conditions of necessity/need for as long as those conditions endure and so long as that which is impermissible is not desired. The obvious example, found in the Qur’an is food: in times of great hunger where there is no alternative to haram food, it becomes halal. However, this permission is strictly for the duration of the necessity and every effort must be made to get out of the necessity.

In contemporary societies where Muslims have no power to influence economic life but are obliged to submit to the laws and conventions of non-Muslims, many scholars have supported the view that, for the purpose of securing shelter for one’s family, it is permissible to take out an interest-bearing loan for. It is not permissible to take on such a loan in order to do business, for example the business of buying and reselling houses or buying a house to rent for profit.

To my knowledge there is no valid argument, past or present, which can exempt mortgages from the general rule about lending or borrowing money on interest. The reasons for the prohibition of renting out money are well known: 1- money is not the kind of property which it is permissible to rent out for profit. 2- viewing money as such a property inevitably leads to concentration of wealth and social injustice. In modern western banking, the situation is made much worse by the permissibility of fractional reserves: a bank can lend more money than it actually possesses and charge interest on such a loan. Modern banks can charge rent for what they do not own; in this way, they create money out of thin air. This intensifies the concentration of wealth (and economic power) and therefore intensifies social injustice.

I have been informed that a scholar claims that mortgages are halal because the bank is lending money for the explicit purpose of buying a particular property. The loan can not be used by the borrower for any other purpose. Apparently, this scholar claims that this arrangement is a type of tawkil, i.e. the borrower is acting as an agent of the lender. This is obviously false, because the borrower can resell the property and thus repay the loan and the lender can not prevent this. On the other side, if the borrower fails to maintain the regular agreed repayments, the particular property can be seized by the lender. There is no agency relationship in any of this. The only reason a particular property is specified in a mortgage contract is that it constitutes a guarantee for the loan and, in many contracts it is in fact the property of the lender with the borrower having full use of it, including the right to resell it provided the lender is fully compensated.