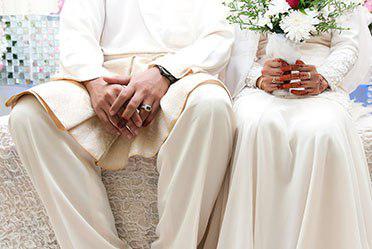 To be legally valid under Islamic law, a marriage must have the witnessed consent of the two persons being married. Nevertheless, marriage in Islamic perspective is best understood as primarily a public social event, though it very much is, also, a private personal event. Though bride and groom at a wedding are the focus of attention, the stars of the show, the marriage is something that happens in the social life of the couple’s parents and siblings and other relatives. It holds the promise of enlarging the network of relations that make up the two extended families. Weddings are generally joyful occasions because they celebrate an assurance of continuity as well as marking a new departure. Marriage is a sort of re-beginning of family life, a fresh start, the turning of a new page in the family history.

In this piece, I wish to share with you in-sha’a Allah some thoughts on three areas of marriage in the Islamic perspective: the personal relationship of the couple, their relationship with the family of which they are the guides, their children, and their relationship with their extended families, especially their parents. Each of these three areas is important, and trying to balance rights and duties in each of them with an eye to rights and duties in the other two, is the likeliest way to some degree of success in sustaining marriage. In all three areas and in all circumstances, the rights and duties make sense in light of the rights and duties of the individual Muslim in relation to their Creator. What is asked of us in marriage is asked of us as believers, and whatever comes to us by way of success or happiness comes by the grace of God to His believing servants and worshippers.

In contemporary Westernised societies, with their aggressive encouragement to individualist self-interest, economic growth and social mobility, the trend is to see marriage as primarily the private business of the two persons who are married, a stage in the evolution of their personal relationship. Their respective parents’ and family networks, and even their own children, are seen as separate and, to varying degrees, secondary considerations.

This orientation exaggerates the importance in marriage of romantic and sexual relationship between two persons. It encourages unrealistic expectations which can lead to anxieties and stresses and, increasingly often, to failure and dissolution of the marriage. Either or both partners feel that they are not happy or not happy enough, that, as persons, they are just not getting enough out of each other to remain loyal to their commitment to the marriage. Overemphasis on the personal side of marriage has consequences for the couple’s extended families, especially their parents, who may be seen as irrelevant, or who may come to feel irrelevant, to the progress of the new family.

The importance in Westernised societies of personal success –often calculated in terms of social status and expressed as purchasing power and/or celebrity – combined with the ever-rising cost of living, encourages husband and wife alike to prioritise their occupations and commitments outside the home. This sometimes adds strains to their personal relations and sometimes offsets disappointment in those relations. It also makes for a home environment in which the children instinctively realise that they are not their parents’ principal concern. The children do not get the full care and attention that they need.

What children get from their home life, taken as a whole, defines for them what they should expect from life. If, for long periods of time, they are not the focus of their parents’ concern, they do not get the training they need to prosper in marriage when it is their turn to marry. Over just a couple of generations this produces a negative spiral whereby marriages are almost expected to fail. Failure is considered the norm and success the exception, rather than the other way round. In societies where this has actually happened, people don’t see much point in the institution of marriage and often don’t bother with it.

In the Islamic perspective, however, the institution of marriage is considered a major pillar of the social structure, and is so strongly commended that we can consider it as, practically, a religious duty. Muslims are expected to marry, to see marriage as supremely important in their lives, and therefore to give it the attention and energy that is needed to make a success of it.

Typically, marriage marks for the bride and groom a transition towards a “home of their own”, which will be both like and unlike the parental home. This transition can be called successful, and the marriage can be called a success, if the building of the new home is supported, rather than impeded and interfered with, by the concerned parents or other elders, and if the new home is such that, though new and different, the parents and elders feel at ease when they are in it, whether as visitors or residents. Such ease is only assured and reliable if, as well as change, there is continuity. The relevance of continuity, of maintaining the bonds with the previous generation, and the importance of humility, patience and civility with one’s parents, is indicated by the explicit duty of a Muslim, strongly commended by God’s Messenger, salla-llahu `alayhi wa-sallam, to maintain ties with one’s parents’ friends even after the parents have died. It is important to love and respect those one’s parents used to love and respect. If we bear that in mind we will readily understand why, from an Islamic perspective, marriage is primarily a social, not a personal, event.

Combining continuity with change is a very hard thing to achieve. It is a composite, a balance, of one with the other. It is very hard to achieve for the parents and elders, as well as for the married couple. As with anything that requires balance, going too far or falling too short – i.e. suffering from time to time a loss of balance – is to be expected as part of the inevitable alternation of failure and recovery through which one learns how to improve one’s balance. Balance is not some theoretical ideal; it is something acquired by doing, a life skill. It is, in the Qur’anic phrase, a hikmah balighah, a wisdom learnt by maturing into it. It is accomplished through experience over time; it is not given before handing the form of easily learnt and applied rules.

God has said that no living creature enjoys certain prior knowledge of its next day’s provision, just as it has no certain prior knowledge of when and where it will die. That is a necessary condition of the drama, the suspensefulness, of life. Its suspensefulness makes life interesting as well as hard; it is a trial which enriches: and surely with hardship comes ease – inna ma`a l-usri yusra.

Of course marriage is a contract between two parties. And contracts do have some minimal rules. These are put in place and elaborated in Islamic law so that in the event of dispute, some sort of objective legal discussion and legal resolution of the dispute can be attempted.  But as for what prevents marriage disputes in the first place, it is, again, not rules that help us but hikmah balighah, the wisdom that we accumulate throughconsecutive experiences of learning to adjust to persons and circumstances, as life unfolds them to us.

I want to go on now to explain the main purposes of marriage, which believers should be striving to achieve through marriage. These purposes concern both personal and social matters, both private and public. Above all, these purposes are all connected – as I mentioned earlier –to our status as believers and our duties as believers. Throughout the many and diverse hardships of adjusting to persons and circumstances, we must hold to the priority of God’s commands. You know the maxim: no obedience is due to anyone that entails disobedience to God. If the customs of family or culture, or the demands of difficult children, push us into disobedience to God, then we must turn aside from those customs, we must refuse those demands. The life skill, the hikmah balighah, is to find a way to do that which avoids harshness of words or deeds, arrogant self-righteous rejection of parents or children, and which favours gentle patience and courtesy, which offers whatever compromise is possible, which asks and gives forgiveness, which waits and waits and waits, and gives people the time and space to change. The reason is simply that God is not the Creator and Lord and Provider of only those who believe and act accordingly, but also of those who do not do that. As I say, it is not easy.