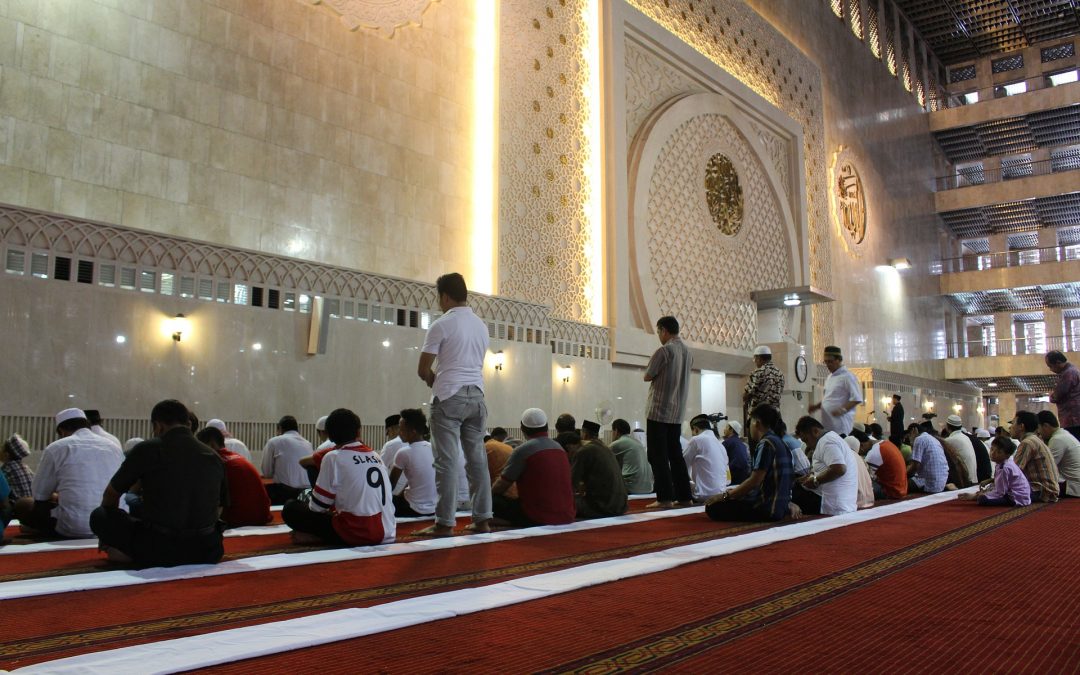 Question:
There is hadith in Abu Dawud that the Prophet (peace be upon him) said: Whoever misses jumu`ah without a good reason should give in sadaqah one dinar (a gold coin); if he can’t find one, then half. Is it obligatory for us to give this amount if we miss jumu`ah?

Answer:
First of all, let me make it clear that the question has to do with missing jumu`ah without a valid excuse. Insofar as this is a hadith that we might or should act upon, it does not apply in the present circumstances of the covid-19 pandemic, when large gatherings for the congregational prayers generally (and gatherings for other purposes) are suspended.

Now, to turn to the hadith:

Abu Dawud has reported in his Sunan, two different versions of this hadith. They are found in k. al-jumu`ah, b. kaffarah man tarakaha:

Abu Dawud narrates from Hasan ibn `Ali, from Yazid ibn Harun, from Hammam, from Qatadah, from Qudamah ibn Wabrah al-Ju`ayfi, from Samurah ibn Jundub, from the Prophet (peace be upon him) that he said: Whoever misses jumu`ah without an excuse, he should give in sadaqah one dinar (a gold coin); if he can’t find one, then half.
Abu Dawud says: Khalid ibn Qays narrated the same hadith (from Qatadah), but he differed from him (Hammam) in the chain of narration and agreed with him in the matn (content) of the hadith.

Abu Dawud narrates from Muhammad ibn Sulayman al-Anbari, from Muhammad ibn Yazid and Ishaq ibn Yusuf, from Ayyub Abi al-`Ala’, from Qatadah, from Qudamah ibn Wabrah, saying that: the Prophet said: Whoever misses jumu`ah without an excuse he should give in sadaqah one sa` or half a sa` of wheat.
Abu Dawud says: Sa`id ibn Bashir narrated the same hadith from Qatadah, but he said: a mudd or half a mudd, and he mentioned Samurah ibn Jundub’s name.
Abu Dawud says: Ahmad ibn Hanbal was asked about the difference in this hadith, and I heard him say: for me, Hammam (a narrator in the other hadith) is better in memory than Ayyub Abi al-`Ala’.

The content of the two hadiths is different: the first mentions gold coin, the second wheat. Then, in the second there is a difference as to the measure of wheat: one narration mentions one sa` or half a sa` of wheat, and the other mentions one mudd or half a mudd. That is quite a difference: a sa` is four times the volume of a mudd.

Besides the difference in the content, Abu Dawud has also noted that the hadith varies significantly in the soundness of the narrators mentioned in the chain of narration (isnad). According to Ahmad ibn Hanbal, the first version (through Hammam) is safer.
I do not think there is need for, or much value in, going through the detail of the differences just mentioned. It is sufficient to discuss the scholars’ assessment of one narrator who is mentioned in the isnad of both versions of the hadith, namely Qudamah ibn Wabrah al-Ju`ayfi.

If a narrator is described as majhul, it means that we do not know about him if he was someone credible in testimony and reporting, and strong in remembering accurately and consistently what he reports and from whom. It follows that we cannot have confidence in what is narrated through him. If what he reports is the same in meaning as hadiths reported through other isnads about whose reliability we are confident, then it can serve as a secondary, supportive reference in any ruling on the matter. But that is not the case here. Rather, according to the experts, this hadith is not sound. Imam Bukhari says: The hadith of Qudamah about jumu`ah is not sound (al-Tarikh al-kabir, 4/177). Ibn al-Jawzi says: This is a hadith that is not sound (al-`Ilal al-mutanahiyah,1/470).

The opinion of our scholars generally is that if someone misses the jumu`ah intentionally, there is no expiation (kaffarah) for it; rather, he should repent earnestly for that, and do the qada’ of zuhr.