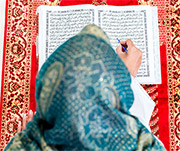 They said: It displeases us that you leave the madhab of Abu Hanifah in some things for the opinions of Malik, Al Shafi’i and Ahmad ibn Hanbal. This is “talfiq” (blameworthy mixing between madhabs).

I said: If we mix well water with other types of pure water, does it not remain in its original state of purity? Likewise it is with the madhabs of Abu Hanifah, Malik, Al Shafi’i, Ahmad ibn Hanbal and the other imams of guidance. So if I move from one opinion to another in an issue due to a stronger evidence or a more appropriate consideration, then what is it that displeases you in that? Additionally, this is “tawfiq” (harmonising between opinions) not “talfiq” (blameworthy mixing) since “talfiq” applies between truth and falsehood whereas this is a combination of truth and truth.

They said: Call it what you wish and there is no restriction in terminologies. You have explained what we wanted and it is a fault in you and those like you.

I said: Where is the fault in that? The Companions of the Prophet (may the peace and blessings of Allah be upon him) and the Tabi’in and their followers did the same.

They said: Leave the Companions and Tabi’in and their followers out of our discussion.

I said: Are they not the best of generations? They said: Of course but leave them out of our discussion and bring us, if you wish to make an argument against us, sayings of our Hanafi masters.

I said: Were Abu Hanifah, Abu Yusuf, Muhammad and Zufar not leaders of the Hanafis?

They said: Of course. They are the best of them in rank and their way is the most exemplary. In fact, they are the foundations and pillars of our madhab. So bring us authentic statements of theirs.

Abu Hanifah allowed tayammum with anything that is considered earth. Abu Yusuf left his opinion for the opinions of others and did not allow tayammum except with dirt or sand.

Muhammad left the opinion of Abu Hanifah on the impurity of urine from an animal whose meat is eaten, for the opinion of the people of Hijaz and Basra and considered it pure.

They said: Leave them out of our discussion. Bring us the sayings of those who came later than them.

I said: Abu Hanifah and his students held the opinion that if hair grows on the face, then there is no obligation to wash what is beneath it. Abu Abdullah al Balkhi left their opinion and held the view that washing these parts is not excused.

They said: Leave them out of our discussion; listing their opinions is becoming lengthy. Bring us the statements of our contemporaries from the Hanafi jurists.

I said: Our sheikh and your sheikh Abdul Fattah Abu Ghuddah held the view that the traveller could combine between two prayers.

They said: Let us not talk about the Arab Hanafis for they have lived and mixed with others and have been affected by them, becoming lenient in issues that we do not approve of. Bring us statements of our Deobandi scholars.

I said: some of your scholars have mixed between the Hanafi and other madhabs, including even shadh (minority, exceptional) opinions, in Islamic Economics and Islamic Finance.

They said: We absolve ourselves of them and so did our leading scholars. So bring us the sayings of our trustworthy scholars in Deoband.

I said: What do you say about “Hakim al Ummat” Maulana Ashraf Ali Thanwi?

They said: He is the most trustworthy and piously cautious of them; so bring us his opinion.

I said: Abu Hanifa’s opinion on the wife of a missing person is that she should wait until 120 or 100 or 80 years (have passed). Malik said she should wait four years from the time he went missing. Hakim al Ummat’s fatwa was on the opinion of Malik.

They said: A scholar might give an opinion or two that are anomalous compared to the majority. So bring us that which they agreed upon.

I said: The scholars of Deoband did agree on this opinion.

They said: Give us another example; we have asked a lot of you and exhausted you and we, if Allah wills, shall certainly be guided.

I said: Abu Hanifa and his students held the opinion that it is impermissible to take payment for teaching the Quran and other religious sciences. Al Shafi’i allowed it and the scholars of Deoband have agreed to give fatwa on his opinion. They said: You have shown us up “for the rest of the day” (i.e. truly shown us up) with this example of yours. We wished you had brought us another example.