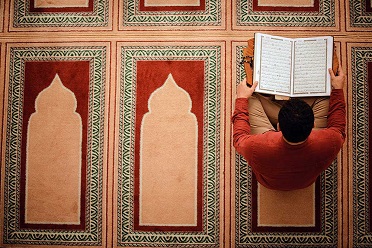 The tried and tested way of teaching the Qur’an is to work through it verse by verse, striving to deepen our experience of the words of God, and to improve conscience and practice of the religion. That said, there is also some merit in stepping back, at this stage of our effort, to articulate some understanding of the surah as a whole, to see how its different themes intersect and interact, support and strengthen each other, and how they cohere with the main, fundamental principles of the teaching in the Book.

Six closely linked passages can be distinguished in this surah.

The dominant theme is summed up in v. 24: that which they (people of the Book) have been inventing has deceived them in respect of their deen. By deen it is meant the obligation or indebtedness of all creatures to their Creator and the way of life by which the obligation is discharged.

The main theme of the first is expressed in v. 37 ‘It is from Allah’, meaning that what the Qur’an teaches is from God, it is not the invention or preference of any individual man or woman, nor of any tribe or clan, nor of any political faction, nor of any doctrinal or other sort of cult or sect, nor is it tied to any geographical or historical location.

The second section is summed up in v. 62: ‘This is the true narrative’, a comment on the corrective telling or re-telling of the births and missions of the Messengers, upon them be peace, Yahya and Isa ibn Maryam.

The first (vv. 64-98) has as its main concern that a faction (not all) of the people of the Book ‘distort the Scripture’ (v. 78). Some do so by altering the record of the Scripture in their care; more emphasised is the practice of those who contrive misleading interpretations of the text and claim that their interpretations are from God, when they are not only not from God, they are directly opposed  to what is central to God’s teaching, namely the absolute, transcendent oneness of God and the command to prepare for His judgement in the hereafter.

The second section runs across the middle verses of the surah and expresses its central message: weigh carefully the consequences for the believers if (v. 100) they obey a party of the people of the Book. To ‘obey’ here means to be led by, to follow. This ought to be unthinkable for Muslims when they have the Messenger of God in their midst, and he is receiving the Revelation and they are witnessing it. (For us now, similarly, it ought to be unthinkable that, having in our midst both the Revelation in a stable, wholly reliable text, and a largely very reliable record of how God’s Messenger, upon him be peace, understood and practised the teaching of God, his sunan, we should look for religious guidance in the attitudes and methodologies of non-believers.)

The first (vv. 109-117) is concerned with the important principle that in their doctrines and behaviours (and attitudes to believers) the people of the Book ‘are not all alike’ (v. 113). Among them, there are virtuous and sincere believers which, as it should, complicates and enriches the relations that Muslims can develop with them.

The second section (vv. 108-129) explains why, emphatically, it is no business of Muslims to be troubled by how things turn out for the people of the Book, whether they do well or ill in this world : ‘it is no concern of yours at all that God punishes them or not’ (v. 128).

The third section warns against the dangerous presumption that being Muslim exempts the Muslims from the trials of this life: ‘did you think to enter paradise untested?’ (v. 142)

In the first (vv. 149-159) some of the historical effects of believing and acting from belief are presented: there are both victory and defeat, both security and anxiety. Some understand that behind the unfolding of events ‘all is from Allah’, unfolding as He wills. Others judge by their own logic or the ‘logic of events’ until they say: ‘Have we any part in the cause?’ (v. 154). This is a device to evade individual and collective responsibility.

The second section teaches the right understanding of the historical effects of a steady faith in God and the Messenger, and how to bear with those who are captive to their misunderstandings: (vv. 175-176) do not fear them, rather fear God; and ‘do not let their conduct grieve you, who run easily to disbelief.’

In the first (vv. 180-188), there is critique of those who demand that God make it impossible for them to disbelieve (i.e., relieve them of the responsibility of being human). They complain that He makes it hard for them to believe, whereas (v. 182) Allah is ‘no oppressor of His slaves’. There is Hikmah in the trials of humankind, their beliefs and doctrines and deeds are enriched and improved only through trial, through understanding, and intending, and then striving to practice the right thing.

In the second (vv. 189-98) the anxiety of the believers is expressed in heartfelt supplications answered by the wonderful assurance (v. 195): ‘their Lord has heard them’; and His promise that no-one’s effort (male or female) is unnoticed or unrewarded.

Finally, we are presented with the stark contrast: those who do not believe or behave rightly (many, though not all, of the people of the Book, are exemplary of this) and yet do well in the world and so throw taunts at the believers for their social or political weaknesses. The Prophet is urged not to be deceived by their advantage: ‘it is but a brief comfort and afterward their habitation will be hell, an evil abode’ (v. 197). The reward of the believers, including for their patient endurance (see v. 200) of disadvantage vis-à-vis the unbelievers, is ‘the gift of welcome from their Lord’ (v. 198).

There are two verses in the third section. Verse 199 is another reminder that some of the people of the Book are sincere believers, and humble before their Lord, who do not pursue their advantage in this life by distorting the teaching of the Messengers. And thus the surah can conclude: ‘O believers! Persevere (in patience), outdo all others in perseverance, be prepared, and be wary of Allah, so that you may prosper.’

That prosperity, though situated in the hereafter, is nevertheless to be presently anticipated and supplicated for; it can be presently experienced in the fine balance between hope and fear, and some of its blessings do indeed become manifest in this life as peace of heart and mind, contentment, resolve, and steadfastness, as also in being able to reserve hope for those who are non-Muslims, including people of the Book, since among them some are striving for nearness to God, even if we cannot see that it is so.

Insofar as the teaching of the surah can be summarised in a couple of sentences, I would say this: Be clear in your mind that the people of the Book strayed from the teaching of the Messengers: their doctrines and narratives and behaviours are presented critically so that Muslims do not fall into the same errors. Some believers see events unfold in the world and they do not have the depth of faith to hold consistently to the reality that all is from God, that all is easily encompassed by His will and subject to it. When their faith slips, their doctrines muddle, they being to mistrust and re-write their traditions and narratives, and so they begin to lose the favour of God in this life and the next. That is evident to us in some respects and hidden in others. Our hope and supplication must be is that we are not deceived in this world to such an extent that we lose our good prospects for our eternal life in the next world and, most probably, also comfort and contentment with present conditions.