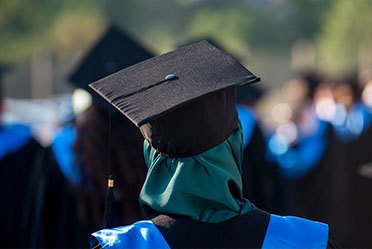 The importance of religion to Muslims means, among other things, an emphasis on Arabic and Qur’anic studies; and the importance of earning their livelihood, notably employment by government or other public agencies, means they have, instead, to learn English, which is (and to a large extent remains throughout South Asia) the only medium through which Western learning, especially its sciences and technology, could be studied.

However, the issue was not a simple choice of Muslims either doggedly adhering to their own language and norms or meekly submitting to the social and political realities, the language and norms, of British hegemony. A Western-style education did not just mean learning a new language and new subjects and the old subjects framed within a new syllabus, it meant also internalising a very different approach to what education is for.  It is worthwhile to step back and remind ourselves about the basic function of education.

In its most elementary and general function, education is the upbringing that equips the younger generation to live ‘a good life’ and belong fully, i.e. take full part, in the human world that they inherit from the older generation. In this sense of the word, every community engages in education. Even in communities without a written culture, elders teach their young how to live well – how to hunt or farm or tend livestock; to distinguish the more nourishing from less nourishing or harmful foods; to recognise symptoms of sickness and seek remedies; to make or mend clothing; to pray individually and participate in collective acts of worship; to memorise and recite the stories of their heroes and ancestors; to make and adorn ceremonial and functional items; to manage protocols (i.e. behave appropriately) on various social occasions; and so on.

There is no human community whatever that lacks theories/stories about the natural world, their place in it, and how to make use of it; or songs, poems and stories celebrating the full range of human experience; or some understanding of number, direction and time; or a sense of beauty and of (religious) meaningfulness. In short, every human community, however unsophisticated, has an accumulated store of knowledge and know-how which more sophisticated societies distinguish as religion, philosophy, aesthetics, science, technology, etc. Education, in its simplest and most general function, is the comprehensive, inclusive transfer of this knowledge and know-how to the younger generation. This does not mean that everyone learns everything; only that everyone is learning for their whole lifetime how to live ‘a good life’ and how to belong fully and take full part in the human world they inherit and, in turn,  pass on to their young.

The older generation’s duty to teach is more than matched by the capacity of their young to learn. Believers affirm that this capacity is God-given. Non-believers are content with their ‘scientific’ observations and demonstrations that such capacity is innate and activated by the environment around the child – in the same way that the capacity of a healthy eye is ‘activated’ when light is presented to it. The child’s learning capacity is most obvious in the speed (and apparent ease) with which it acquires language. The child has to acquire language, since it cannot otherwise fully develop the inter-personal skills needed to live well in a human community and access its store of collective knowledge. Learning capacity is likewise evident in how quickly children are able to recognise spaces and distances, to sense or measure the passage of time, to distinguish hypothetical from real situations, to imagine and conjecture, to represent and symbolise. It is not individual parental actions but the human environment as a whole that activates the capacity for these fundamental skills. Formal teaching is not directly involved. Indeed, it is likely that formal teaching is only possible on the basis of those basic skills being acquired beforehand or concurrently.

With increased sophistication of collective life, formal teaching in its later stages is adapted to instruct the young in specialised occupational skills. In some communities, certain tasks (priestly functions for example, or symbolic leadership of the community) are sealed in mysteries and some classes of people are formally forbidden to learn them. However, rigid caste systems which confine people to particular occupational classes and deny to them the knowledge or know-how needed to engage in the whole life of their society, are the exception, not the norm. In the vast majority of societies before the modern era, specialised education was an addition or supplement to general education — acquiring specialised knowledge or skill did not mean that the person was exempted from the necessary knowledge of what it is to live ‘a good life’ and to be a responsible recipient and agent of the whole culture of one’s community.

In the pre-modern era there was substantial continuity between general education and specialised education. There was, accordingly, a substantial continuity of the culture from one generation to the next – the older and the younger generations did not live in their own ‘worlds’ substantially cut off from each other’s understanding or experience of ‘a good life’. Pre-modern conquest and colonisation, similarly, did not entail for the conquered the substantial ruptures with the norms and values of their culture that were so abruptly (and often arrogantly) loaded on to them in the modern era of conquest and colonisation by Europeans.

The cumulative effect has been that, for education to be considered effective, the criterion is not how well people live ‘a good life’ or how fully they imagine, understand and play their part in the whole culture of their community, but how much they are able to earn for themselves and for their community – i.e. the criterion for an effective education system is its competence to deliver individual and collective income. In the so-called ‘American dream’, for example, the contents of ‘a good life’, the goals of human effort, now no longer include the ‘family values’ and ‘civic responsibilities’ once treasured as necessary to the proper functioning of a republic of free men and women; the ‘American dream’ now consists exclusively of disposable monetary wealth and celebrity.

Of course, the other dimensions of human life peripheral to economic transactions have not disappeared: language persists, culture persists, religion persists. But, under pressure of the dominance of economic transactions, language, culture and religion have become a kind of specialized services, more or less marginalized (i.e. made less important, less central to what a person needs to know and be good at), and to a lesser or greater extent adapted to fit the dominant economic mode – their public value is weighed according to how well they fulfil the service-functions of distraction or consolation. Valued in this way, language, culture and religion have adopted forms of expression that make minimal demand on intellect and spirit while producing the maximum of local psychological and emotional relief.  It is unsurprising that language, culture and religion are reduced and packaged so that they can be consumed in the same way as pills which (by chemical rather than cultural means) produce the necessary relief or distraction.

Even in the most modern of modern societies parents still feel and carry the burden of providing the general education that the younger generation need — personal and social skills; identification with a socio-political history and cultural-religious tradition – in order to internalize conceptions of ‘a good life’ for themselves individually and for their communities collectively. But children’s learning capacity is activated by the human environment as a whole, not only by their immediate family. What children come to know about how to live and what to value in life are determined by the whole public space – this includes not only informal teaching by parents and formal teaching at school, but all the influences that come through the goods that are circulated around them and the sounds and images they internalize from a vast array of impersonal sources. The dominant common currency for measuring the values which influence people’s aspirations is economic success defined in monetary terms. In the public space values measured in other currencies and other terms are given lip-service but carry relatively little weight. While the education succeeds in delivering income-earning capacity for individuals and for the collective, it fails to provide the orientation, the norms and priorities for life as a whole, that had been the function of education in pre-modern societies. The costs of this change are high: a gradual, nevertheless perceptible, deterioration in standards of civility and citizenship – essentially, a lack of care for others – accompanied by an increase in disorientation, manifested in irrational fearfulness, anxiety and depression. The disorientation may be understood as a fragmentation of general concepts like ‘beauty’, ‘truthfulness’, ‘care’,  ‘good’, which have no stable meaning from one generation to the next. One consequence of this is that people can no longer imagine building a human environment that will have enduring value, and elicit the grateful admiration of, their grandchildren and great-grandchildren. Instead, they imagine and invest their efforts only for themselves and their own children, the present or near future, for which the returns on investment can be more or less reliably forecast. To the extent  that economic success has delivered material comforts, the fabric and substance of those comforts are so aggressively short-lived and disconnected from general values , that their yield in comforts is invariably shadowed by the discomforts of anxiety and aimlessness.

It is important to note that modern education, even when seen (as above) only in a negative light (which is not the only way to see it), nevertheless enjoys some cultural continuities with the Western societies that gave birth to it. For the non-Western societies into which it was introduced, abruptly in most cases, modern education entailed a substantial rejection of their own past and of the values and priorities embedded in it. In some places, by simple fiat of the conquerors, a change in the official language and script rendered highly literate and cultured communities ignorant and illiterate, just as a change in the currency reduced prosperous communities to destitution – in effect, their stores of value, literally and figuratively, were suddenly made worthless.  It is entirely natural that, for a long time, for as long as they could, the conquered people continued to resist, and then to resent, the ways that their new masters imposed upon them, and to accept of them as little as they could in order to ensure survival. These accents or moods, in how the Muslims responded to the challenges of colonial rule in India, are clearly evident in the narrative and discussion in this book. Before commenting on that narrative and discussion, I think it is appropriate to reflect, first, on the other function of education, namely, not to reproduce but rather to challenge the community’s conception of ‘a good life’. This function does not fit the individual’s spirit and intellect to the norms and values of his or her community, but instead so unfits the individual that he or she is able to break new ground, to bring change to the inherited (authorized, authoritative) conception of ‘a good life’. Modern education quite consciously and deliberately promotes and propagandizes itself as excelling in this function. Accordingly, European conquerors did not entertain many scruples when they annulled the life-ways of the peoples they conquered; they appear to have believed that those ways were stagnant and deadening to the human spirit, and surely many of them(however implausibly) believed that they were serving the long-term interests of the conquered people in severing them from their past.