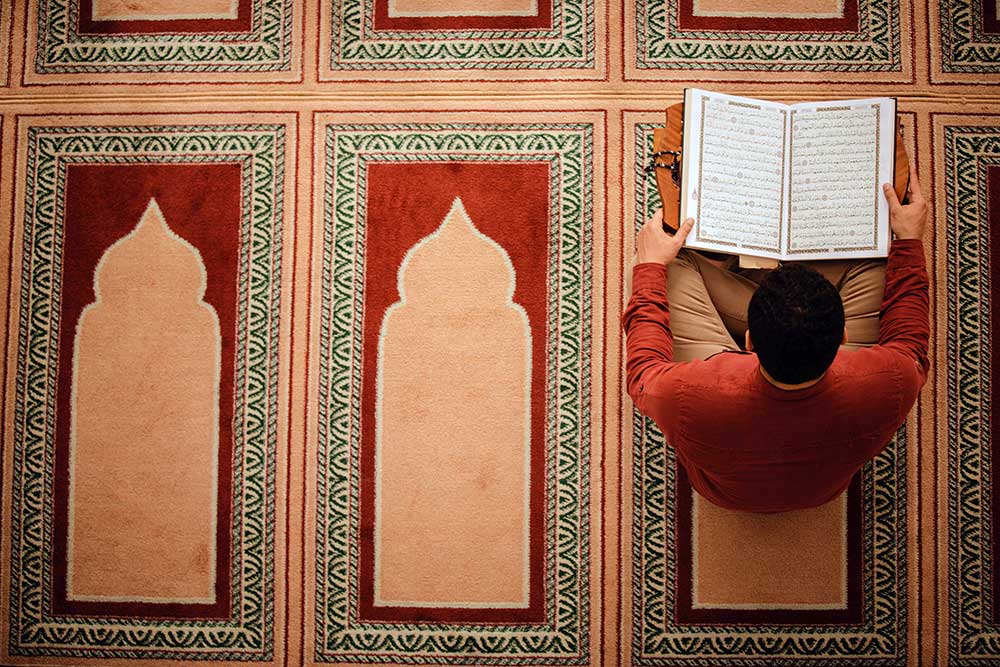 The longer surahs at the beginning of the received text of the Qur’an have a complex arrangement of passages because they are simultaneously addressing three major concerns of the Qur’an, and the focus of attention alternates between these concerns.

The first is to make people aware of God and the Last Day, that is, of the inevitability of achieving complete self-knowledge. That will happen, whether we will or not, when we receive and have read out the record of all our thoughts, intentions, actions and those consequences for which we are responsible. In the life of this world such a degree of self-knowledge would be impossible to bear, but in the next we shall certainly be made able to bear it, and to endure the judgement that follows. An important constituent of this awakening of our awareness of God and the Last Day, is mention and explanation of different attributes of God. This teaching teaches us how to think about God when we need to petition Him and when we need to understand why He has created reality as a whole in the way that He has. This teaching is not intended to encourage us, or prepare us, to elaborate a theology or any other philosophy of religion. It does not offer theoretical knowledge; it offers practical knowledge of how to be mindful of God both when formally worshipping or remembering Him, and when we go about our everyday transactions with other people and with the natural world.

That mindfulness of God is the foundation of, and the means by which, Muslims are enabled to make the necessary personal and collective sacrifices in order to establish a just social order. A just social order is the second major concern of the Qur’an: it is a requirement of the faith not just to know what is right and good, but to implement it, and encourage others in implementing it, and to strive in the right way against all the forces, internal and external, which oppose such implementation. The social order envisaged by the Qur’an includes family obligations, obligations within marriage and divorce, and the social and legal rights that derive from those obligations. The society that Muslims are expected to live in and cope with as believers include Muslims with very different levels of faith and different levels of understanding and competence. It also includes non-Muslims with whom it is obligatory to have good, neighbourly relations, and whose different beliefs and ways must be respected with warmth and civility: judgment of those differences is to be referred to God and the Last Day. The just social order also envisages establishing principled relations with external communities, some of whom may be at war with the Muslim community, and some at peace, and some between the two. Thus, the management of religious, legal and political authority, as well as family and economic life, are part of the preparation for the self-knowledge that will be completed at the Last Day. None of the injunctions and exhortations about establishing a just social order provide material for abstract or theoretical philosophising about the ideal polity.

Rather, all the commands and commendations of the Qur’an are linked to actual historical circumstances at the time of the sending down of passages of the Book. Thereafter, at the end of the Prophet’s life, these different passages were brought together in an orderly and coherent assemblage (the long surahs as we have them now), which gathers, juxtaposes and combines, all three concerns. The order of passages in the received text should be revered as part of the revelation because the established tradition is that the final form of the Qur’an was directed and supervised by the Archangel Jibril, `alayhi s-salam. (By contrast, the names by which we know the surahs today are a convenient shorthand, established by later convention, and not part of the revelation.) Now, acknowledging that passages of the revelation are connected to actual historical circumstances, does not mean that those passages are like newspaper or historical records, with dates and places, and names of persons, and an explicit chronology of events. How the Muslims are responding to the Qur’an and the teaching of the Messenger is typically presented by recounting how people responded to the teachings conveyed by the Prophets and Messengers sent to the peoples of the Book. Sometimes, it is indeed the case that a particular event in the time of the Last Messenger is mentioned, but even then it is the quality of the Muslims’ faith and their understanding of what faith demands of them that is addressed, not the detail of the particular event. As well as allusions to the narratives of the Prophets sent to the peoples of the Book, many passages in the longer surahs explain the failings in how those peoples understood those narratives, and, in a few cases, their distortions of the message, either by changing or fabricating its words, or by willfully misinterpreting it. In this way, the Muslims are warned against repeating the same mistakes of doctrine and practice that characterise the ideas and attitudes, the speech and conduct, of the peoples of the Book. The ‘history’ concern of the longer surahs is thus a way of presenting Islam as the rectification and preservation of all of God’s revelations to mankind. This adds a larger dimension to the obligation to establish a just social order – upholding the truth of faith in God, by practising it and transmitting the knowledge and practice (without additions, alterations or elaborations that do not have the authority of God) is an important means of delivering a just social order.

The longer surahs like Al `Imran are at the head of the Qur’an because they embody the message as a whole. They too do, in places, like the short surahs at the end of the Book, evoke a religious or devotional mood, a rush of faith. But this mood is not the end itself. It has to be combined with, feed into and be tested by, the other demands of the religion. Muslims are required to be the best exemplars of sincere faith and to build the exemplary community of believers, without lapsing into the grave sin of thinking themselves God’s favourites. God’s favour is acquired by faith and good deeds; it is not guaranteed by mere belonging to a lineage, or by mere proclamation of faith in a ritual mystery. That, ultimately, is the reason why the teaching must be connected to everyday reality, to history, because it is through that connection that self-knowledge is tested and demonstrated, which is the purpose of the creation of mankind. The point is to be ready, here and now, for the fulfilment of that purpose hereafter.