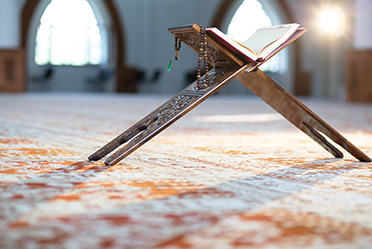 They said: You have worked in Oxford for twenty years on an academic project looking at the history of the Islamic sciences in India and its Madrassas and centres of learning. So what is the best madrassa in the long history of India, given the multitude of its madrassas and the variety of its institutes and the differences in its centres of teaching?

I said: That would be Darul Ulum Deoband.

I said: I seek refuge in Allah from being from the ignorant. Do you want me to be sectarian or to be sincere? To be discerning or to mislead? To be prejudiced or to be just?

They said: We know you to be sincere, discerning and just. So reveal to us the aspects in which you prefer Darul Ulum Deoband over the other madrassas.

I said: That would take volumes [to write].

They said: Spare us your volumes as we have become tired of them. Summarise for us some of their points which would be indicative of others and we will be most grateful to you.

I said: I have summarised them in three points so listen to them and remember them.

The first point is the attention paid by Darul Ulum to the noble prophetic hadiths. The teaching curricula in India were deficient in noble prophetic hadiths. Those in charge of the curricula had not stipulated any books of hadith except for “Mashariq al Anwar” of Saghani which they then replaced with “Mishkat al Masabih”. As for the six primary collections, they were not added to the studied texts until the arrival of Imam Ahmad ibn Abd al-Rahim, better known as Shah Waliullah al-Dehlawi, who added some of them, as well as the “Muwatta”, to the curriculum. Things remained like this for a century, then Darul Ulum was established. It was the first madrassa to concern itself with teaching the six primary collections as well as the “Muwatta”, according to the narrations of both Yahya ibn Yahya al-Laithi and Muhammad ibn Hasan al-Shaibani, and “Sharh Ma’ani al-Athar”. This is a merit by which Darul Ulum Deoband is distinguished from the other madrassas in India, and even across the entire islamic world.

They said: You have an interest in isnads (chains of narrations) and ijazahs (certificates of authority). So who are you connected with from the hadith scholars of Deoband?

I said: I am connected with all of them via many routes and various isnads, and to Allah belongs all praise and thanks.

They said: So what is your highest sanad to them, the most noble and the strongest?

They said: You have certainly attained high, noble chains of narration, all of whose narrators are imams of fiqh and accurate experts of hadith. So bring us the second point.

They said: Who is their head and leader in that?

I said: The imam, the unique luminary, the pious, the pure, the devout scholar, the inimitable Shaikh Rashid Ahmad al-Gangohi, may Allah show him abundant mercy, raise his ranks and make him of those close to Him. No mother has been capable of giving birth to his likeness and history has been unable to produce similar to him. He is the one for whom my heart has been filled with love and appreciation. He resembles the two imams, Sufyan al-Thawri and Ahmad ibn Hanbal, in the purity of his heart and the strength of his faith, in his servitude to Allah and submission to Him, and in his revival of the Sunnah and vanquishing of innovations.

They said: Has anyone else been similar to him in the long history of India?

I said: [Can there be anyone] other than this one?

They said: We beseech you to answer our request.

I said: Will you excuse me (from having to mention anyone in a similar way)?

They said: We do not excuse you.

I said: Well if you refuse then perhaps Imam Muhammad Isma’il ibn ‘Abd al-Ghani ibn Waliullah al-Shahid, may Allah have mercy on him. I adjure you to not ask me for a third to go with these two.

They said: Bring us your third point.

I said: The third point is Darul Ulum’s production of practising scholars who cultivated their inner aspects before building their outer aspects, who purified themselves of all depravities, who cleansed their hearts of envy, hatred, malice and loathsomeness, who lived lives of piety, cautiousness, asceticism, contentment and sufficiency, who devoted themselves to worship and to the teaching and upbringing of the people, and who prepared followers who resembled them in purity and virtue and who spread to all corners of India and even beyond, calling mankind to the worship of Allah, exalted is He, and to following the Sunnah of the Prophet, may Allah’s peace and blessings be upon him.

They said: Name them.

They said: Tell us the names of their most eminent scholars.

They said: This will suffice for us. We have heard you speak in the most laudatory terms of the erudite scholar Rashid Ahmad al-Gangohi. Can you please point us to a source containing his biography?

I said: The best biographer of him was the erudite scholar and muhaddith Muhammad ‘Ashiq Ilahi al-Mirti, who wrote [his biography] in urdu.

They said: Does he have an Arabic biography?

I said: His biography in “Nuzhat al-Khawatir” is one of the best and most comprehensive. I have had the intention to write a detailed biography of him and have collected the material so ask Allah that he gathers my resolve and makes me successful in completing it.

They said: We will certainly make du’a for you.