The Jumu’ah Khutbah in Non-Arabic 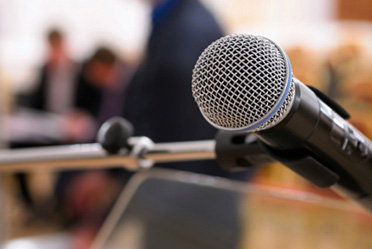 I once entered a mosque in Oxford with some Arab friends of mine to perform Jumu’ah prayer at its beginning time. The Imam, as is the practice followed in non-Arab countries, was preaching to the people in his native language. My friends asked me, “Should we pray Sunnah prayers or sit and listen to the khatib (preacher)?” I said: “Pray before you sit down. For Jumu’ah prayer here is governed by chaos and disorder. There is no organisation and no harmony. Some people are adamant that the Jumu’ah khutbah is not valid unless delivered in the Arabic language. But the imam is not proficient in Arabic nor are most of the followers. So they precede the khutbah with a few words in Urdu, Bengali or English, using up all the time, thereby preventing people from praying Sunnah or voluntary prayers, reciting Quran or making dhikr. Then when the Mu`adhin calls the second adhan, the Imam stands and recites from a collection of khutbahs, poorly phrased and lacking in meaning, which was written in India a century or more ago, set to rhyming prose. He sings the khutbah, making mistakes and paying no attention to grammar or word endings (i’rab).”

My friends were alarmed at this painful sight and this belittling of the right of one of the symbols of the religion. We did not have to wait long before the Mu`adhin called the adhan and the Imam stood and recited the two khutbahs, ending the second with a prayer for ‘the Sultan, son of the Sultan, the Khaqan, son of the Khaqan, may Allah prolong his reign and dominion’. When the prayer was over, my friends asked me, “Who is this Sultan for whom the Imam prayed?” I said, “He is the Caliph ‘Abd al Hamid the Second, Sultan of the Ottomans, may Allah have mercy on him.” They said: “Why do they not know of his death?! How appalling and worrying are your contradictions. You are in Oxford, a city of knowledge and culture, yet [you are] steeped in blind ignorance, far removed from the shining tradition of the learned.”

When I related these stories to my students, they asked, “What is the way out from this turmoil and confusion? Muslims in Pakistan, India, Malaysia, Indonesia, Turkey, African and European countries, America, and other places all speak languages other than Arabic. Is it allowed for them to deliver the Jumu’ah and Eid khutbahs in their native languages in which they communicate?” I replied, “Do people across the entire world address one another and speak to each other except in languages that they can communicate in and mutually understand each other through? Isn’t the only purpose of the khutbah delivery and communication of a message?  And there is no delivery and communication between the sender and receiver if they are separated by barriers of culture and language.”

They asked: “Was the Noble Quran not revealed in clear Arabic language? Was our Master and Beloved, the Seal of the Prophets, may Allah’s peace and blessings be upon him, not sent from the Children of Adnan and the progeny of Ya’rub ibn Qahtan?” I said: “Of course! And I am no less keen than you are that Muslims perfect this language. But as long as they remain non-proficient and non-skilful in it, how can they be preached to in a language they cannot understand or benefit from?”

They asked: “Does the khutbah not take the place of two raka’ahs, and hence must be in Arabic just as recitation in prayer must be in Arabic?” I said: “The two are separate and different from each other. Cleanliness and other specific states, as well as facing the Qiblah, are conditions for prayer but they are not conditions for the khutbah. And if a person misses the khutbah, he is not ordered to make it up afterwards.”

They said: “The khutbah is dhikr (remembrance), so it is not necessary to understand its meaning.” I said: “The khutbah is dhikr hence it’s meaning must be understood; for how can reminding take place with speech that is not comprehended or words that are heard but not understood? In this regard, some Hanafi jurists allowed the one who is far from the imam and cannot hear him to occupy himself with something more beneficial. Al Kasani relates from Nusair ibn Yahya that he allowed such a person to read silently, and that ‘from amongst our scholars, Al Hakam ibn Zuhair used to look at books of Fiqh’. Al Kasani said: ‘His argument was that listening and being silent was required of those near [to the imam] so that they may partake in the fruits of the khutbah by pondering and reflecting on it. This is not realised by the one far from the Imam, so he should gain for himself the reward of reciting Qur’an and studying books of knowledge. In addition, silence is not the objective but rather it is the means to listening attentively; so if the obligation of listening attentively is annulled, so too is [the obligation of] being silent annulled’.”

They asked, “Who held the opinion allowing the khutbah in non-Arabic?” I replied, “It was the position of the leading authority amongst the mujtahidin and the one on whom everyone in Fiqh is dependant, the Greatest Imam, Abu Hanifah, Al Nu’man ibn Thabit al Kufi, may Allah have mercy on him. He permitted it in Persian, whether people were proficient in Arabic or not. And he permitted it with a small amount of dhikr, such that if a person glorifies Allah or says the declaration of faith or praises Allah [in Arabic], with the intention of it being the khutbah, it would suffice for him. If this amount of dhikr suffices for a khutbah, then there is no reason to speak disparagingly of those who give the khutbah in their own non-Arabic languages, since their speech will include more than this amount of Arabic. Reliable jurists of our time from the four Madhahib and other schools have given legal edicts allowing the Jumu’ah and ‘Eid khutbahs in non-Arabic.”

They asked, “Have any of the contemporary Hanafis held this view?” I replied, “A large group of them held this view, Arabs and non-Arabs. And it has become the norm in Turkey and most of the Central Asian countries. I participated in a conference in Turkey years ago, attended by over four hundred scholars and jurists, including leading scholars of India and Pakistan, from Deoband and other [institutions]. We prayed Jumu’ah in a mosque in Istanbul and the Imam delivered the khutbah in Turkish with no one objecting to the situation nor exempting themselves from it.”

They asked, “What is the Sunnah concerning the khutbah?”

I replied, “Two khutbahs separated by a sitting is from the Sunnah of the Prophet, may Allah’s peace and blessings be upon him. He would convey, in both, a message to the people and a warning.  When he preached, his eyes would turn red, his voice would rise, and his anger would intensify as if he were warning of an [approaching] army, saying ‘they will surely attack you in the morning or evening’. The imam should not exceed two khutbahs. He should commence them both with Arabic, including praise of Allah, blessings on the Prophet, may Allah’s peace and blessings be upon him, and verses from the Noble Qur`an. He should preach to the Muslims eloquently in their language, without being excessive or long-winded. And he should end the second khutbah with a prayer for the believing men and women.”