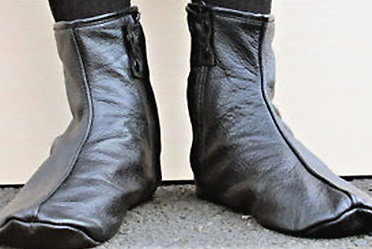 They said: What is your opinion regarding Shaykh Mohammad Nimr al-Khatib?

I said: He is our teacher. The most erudite, the prolific and high narrator of hadith, the virtuous, al-Sayyadi al-Rifa‘i al-Husaini, hailing from the Palestinian frontier town of Haifa. He travelled far and wide, finally settling in Madina where he died. He fused knowledge with action, fiqh with fatwa, preaching with struggling in the path of Allah and teaching with the nurturing of souls. What exactly would you like to know about him and what is it concerning his affair that you seek to be apprised of?

They said: It has come to our attention that he bade you not to wipe over jawrab (cloth socks).

I said: Yes, he did so with sincerity, love and regard for me.

They said: But we have witnessed your wiping on jawrab and issuing a fatwa according to that?

I said: When I first arrived in Europe I was not of this opinion and would deter others from following it. Then, with my own eyes, I witnessed the difficulties people faced in washing their feet for ablution in public places. Sometimes, they would even neglect to observe their prayers whether travelling or in their localities, while journeying or otherwise. So I scrutinised the matter, studied it from all angles and issued a fatwa on its permissibility. Many, indeed, expressed that this fatwa of mine facilitated for them their worship and helped them to be mindful of their prayers in their daily lives and when out and about.

They said: But how, pray, has it pleased you to defy this gracious and pious teacher? What has made it seem fair to you to oppose this well-meaning, kind scholar? For he especially favoured you for his exhortation and individually selected you for this advice.

I said: I have taken as my exemplars the mujtahid imams and the scrupulous scholars from the salaf (pious predecessors); for the students of Abu Hanifa, al Awza‘i, Malik, al-Thawri, al-Layth, al-Shafi‘i, Abu Thawr, Ahmad ibn Hanbal and Ishaq ibn Rahawayh opposed their own teachers and the founders of their schools [on this issue].

They said: They differed on the basis of evidence that seemed fair to them; what is your evidence? Do you have an unequivocal verse that establishes the permissibility of wiping on jawrab?

They said: Do you have such a hadith?

I said: A weak hadith.

They said: It is disconcerting for us to hear you say this for we have heard you discredit the use of weak hadiths in both masa’il (legal matters) and fada’il (virtues).

I said: The weak hadith is, in fact, not the basis of my opinion but rather the plethora of well-known hadiths on the topic of wiping [over khuff (leather footwear)], some of which are related in Bukhari and Muslim.

They said: But can you not see the difference between khuff and jawrab?

I said: Yes, but the difference is immaterial to the ruling. Your opinion, and the opinion of those who follow you; that the manat (legal basis) of the ruling [on wiping khuff] is their being leather; is tenuous. The truth is that the manat of the ruling lies in [khuff and jawrab] acting as coverings for the feet. Furthermore, people’s need for khuff is commensurate with their need for jawrab. Since wisdom and need are equivalent so too is the ruling. It is reprehensible to force a distinction between two equivalents and to equate two dissimilarities. You have erred in this, just as you erred in the matter of khamr (alcohol): you held that khamr is from grapes or dates and its being so is the very basis for its ruling. You resultantly prohibited other intoxicating beverages through qiyas (extension by analogy) with khamr. Hence, you misconstrued the basis of the ruling and were at pains to exercise qiyas where in reality none exists.

They said: Let us focus on jawrab. You have clarified your reading of the hadith but if the possibility of divergent interpretations remains, neither of our readings can take precedence. Did any Companion of the Prophet (may the peace and blessings of Allah be upon him) wipe on jawrab?

They said: And what is the position of other Companions?

I said: There is no record that any one of them dissented. This is what you class as ijma’ sukuti (scholarly unanimity by lack of dissent) which is hujja (evidence) according to you.

They said: And did any tabi’i or scholar from the main centres of learning follow this?

They said: Haven’t some stipulated that jawrab must be thick enough, or should be waterproof, or that they should be able to stand of their own accord without having to fasten them?

I said: These distinctions, as you well know, are incidental (furuq tardiyya) having no bearing on the ruling at hand. It has, in point of fact, been narrated to us that this is the opinion that Abu Hanifa settled on towards the end of his life.

They said: We find that incredible.

I said: Tirmidhi has said, as is found in some versions of his Jami‘: I heard Salih ibn Mohammad al-Tirmidhi who said: I heard Abu Muqatil al-Samarqandi say: I visited Abu Hanifa in his final illness. He asked for some water and performed his ablutions. He was wearing jawrab and wiped over them and then said: Today, I have done something which I have not done previously.

They said: Has anyone from our madhab (school) related this account?

I said: Al-Kasani has in Bada’i‘ al Sana’i‘ and other authors of the Hanafi madhab have too.

They said: We have apprehended your point of view but remain unconvinced by it and are not bound to accept it.

I said: It is not the role of the scholar to persuade or to compel and coerce others but simply to teach and elucidate. I seek the assistance of Allah alone and in Him do I place my trust.