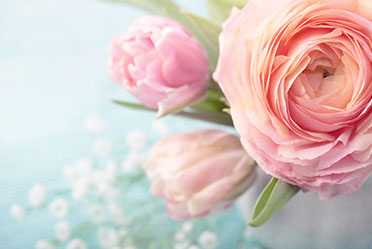 Women in the state of menstruation or post-natal bleeding are not allowed to fast. Nevertheless, fasting the full month of Ramadan is obligatory on those women, and they have to make up the number of days missed when they are able to do so. Mu`adha al-`Adawiyyah asked `A’ishah, may Allah be pleased with her: “Why is it that the woman in the state of menstruation does qada’ of fasting, and does not do the qada’ of salah?” `A’ishah answered: “That used to happen to us, and we would be commanded to do qada’ of the fasting, not the qada’ of salah.” (Muslim, k. al-hayd, b. wujub qada’ al-sawm `ala’ al-ha’id).

It is recommended that one does qada’ of the missed fasts as soon as one is able to do so. However, if the women delay the qada’ for a reason then there is no sin in that, and they don’t need to do anything else other than the qada’ of the missed days. `A’ishah, may Allah be pleased with her, narrated: “Sometimes I did miss some days of Ramadan, and was not able to fast in lieu of them except in the month of Sha`ban [i.e. almost the full lunar year later].” Yahya ibn Sa`id, a sub-narrator, says: “She used to be busy serving the Prophet.” (al-Bukhari, k. al-Sawm, b. mata yaqdi qada’a ramadan; Muslim, k. al-Siyam, b. qada’ ramadan fi sha`ban.)

As for the main burden of the question: Can they join the intention of making up the missed days of Ramadan with fasting in Shawwal? Abu Ayyub al-Ansari reported from Allah’s Messenger, peace be upon him, that he said: “For one who observed the fast of Ramadan and then followed it with six days of fasting during the month of Shawwal, it is as if he had fasted continually [i.e., all year].” (Muslim, k. al-Siyam, b. istihbab sawm sittati ayyam min shawwal). I have discussed elsewhere that there is some disagreement among the early scholars as to whether this hadith is one that can be confidently acted upon since it is not recorded of the Companions and Followers that they acted upon it. What is clear from this hadith is that the six days of Shawwal are only for those who have completed the fasts of Ramadan. So women who have missed some days of Ramadan should start the qada’ fasts as soon as they can, and (if they are able to do so) they may also fast some days of Shawwal. If a woman habitually fasts the nafl fasts on Mondays and Thursdays, or three days of every month, and then does her qada’ fasts on those days, she would not lose the reward of her nafl fasts.

I take the opportunity of the hadith I cited at the beginning to remind myself and my fellow-Muslims to follow `A’ishah’s example when teaching the duties of the religion. Mu`adha asked why a woman who has had to miss fasts and prayers must make up the fasts and not the prayers. `A’ishah did not answer this question because it could only be answered on the basis of her own reasoning, not on the basis of the teaching known to her of Allah’s Messenger, upon him be peace. His teaching has religious authority because he was appointed by Allah as His Messenger: he did not appoint himself to this role. Whenever Muslims resort to their own powers of reason to explain a religious duty, and however good their intentions in doing so, their reasons and explanations cannot have the authority of Allah’s Messenger, and should never claim to have it. If such a claim is made, it is certain to be challenged by another Muslim, perhaps with intentions just as good and powers of reasoning and speech just as persuasive: the outcome, sooner or later, is disagreement among Muslims and, unless the help of Allah intervenes, such disagree¬ment may lead to dissensions and schisms that trouble people’s trust in the religion and enfeeble the solidarity of the ummah.

`A’ishah was widely revered and admired, and regularly consulted, precisely because of her powers of reason and memory, her understanding of the religion and her devotion to it. And yet, as we see here, she avoided two things: she did not criticise the questioner for the form of the question, did not try to embarrass her in any way; she did not teach her own opinion, being focused resolutely on teaching the commands of the religion as those commands were passed to her by Allah’s Messenger, upon him peace, neither adding to nor subtracting from them. Had she done either of those two things, she would (a) not have been following the manners of the Messenger’s teaching, and she would (b) have been putting herself forward and standing in the way of the light of that teaching, taking the risk of obscuring it or complicating it even though she could have no such intention.

Note also that it is clear from her practice that she understood that the command to women to make up the missed days of Ramadan was a command that she did not allow herself to forget for the best part of a whole year. We can learn from the practice of this Muslim of exceptional intellectual and devotional capacity and exceptional conscience that she had not heard from Allah’s Messenger that the missed fasts must be made up straightaway, only that they must be made up and the missed obligations not allowed to accumulate year on year. We know for certain that if you intend a good deed it is sensible to act on that intention as soon as it is practicable to so, and not to keep postponing such action. Now, making up some days of fasting in Ramadan that you have missed because of travelling or sickness or menstruation or other unwilled necessity is a good deed, and so it should not be postponed unnecessarily. Any unnecessary postponing is a sort of making light of Allah’s mercy in making the commandments of His religion a means of ease for us, here and hereafter.